Mayor Bowser’s War on Rats comes to H Street, NE, with a news conference held in the alley behind Smith Commons 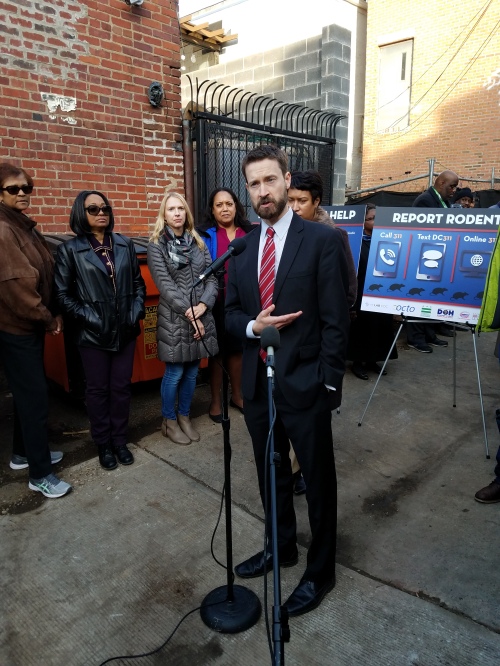 PHOTOS OF MAYOR BOWSER’S RAT WALK FROM 13th and H STREETS, SE, TO MONTESSORI SCHOOL FOLLOW THE ARTICLE BELOW

Mayor Bowser confronted the city’s rat problem head on this afternoon, holding a press conference in a trashy H Street, NE, alley, followed by a up close and real tour of nearby alleys where she poked into trash bins and ending up at Capitol Hill Montessori School where she heard about rodents in the building and inspected rat burrows near the building’s entrance.

At Bowser’s press conference, held next to a couple of smelly dumpsters behind Smith Commons on H Street, she introduced a new tool in the fight against the city’s rodent population: dry ice.  Dry ice will not replace rodenticides but will supplement their use. The mayor’s announcement not only heralded the use of the dry ice method by the Department of Health but was also intended to educate and encourage the public to take the initiative to use the method on their own.  Tommy Wells, Director of the Department of Energy and Environment, stressed that homeowners can apply this home remedy for as little as .50 cents a burrow.  (One place on Capitol Hill that sells dry ice is Harris Teeter’s at 14th and Pennsylvania Avenue, SE.)

Department of Health employees demonstrated the method.  Dry ice is packed into a rat burrow and the entrance is covered with dirt.  As the solid form of carbon dioxide becomes a gas, it displaces the oxygen in burrows.  Gerard Brown, Manager of the Department of Health’s Rodent Control office said that the rats suffocate and “their home becomes their grave”.

Councilmember Charles Allen – who has rat control legislation pending before the city council (see here: http://bit.ly/2A5jt9o) – said he was glad that the Mayor was “out here” and told her that she has a partner in him to address the city’s rodent problem. He said, “My legislation would add more tools to the toolbox by requiring food establishments to think ahead and incorporate rodent control into their daily business plans. In the end, food waste is what attracts and sustains rodents. I would love it if restaurants would adopt indoor trash storage, and though that is not always feasible, it remains a goal to aspire to.”

According to Bowser the city assesses the magnitude of the problem by tracking the number of calls to the city complaining about rats and the number of rat burrows in the city.  Asked if the use of dry ice comported with EPA regulations, the mayor gave assurances that the method is in accordance with “guidelines”.

Another recent initiative being taken under the Department of Public Works (DPW) is a trash compactor grant program for restaurants, and the agency is actively encouraging restaurants to partner with the city to take advantage of the program.  Some activists – especially those near Barracks Row who have fought the rat war for years – say that compactors are not effective against the proliferation of rodents and the gold-standard solution is indoor storage.

Throughout, participants emphasized the need for a cooperative effort, echoing Allen’s and Council Chair Mendelson’s call for a systemic approach (Mendelson says a block-by-block approach) which would bring city agencies and restaurants to the table together to create a cooperative effort against rats.  Still, today’s announcement fell short of that, focusing on a “quick knockdown” approach, and deferring the broader more comprehensive approach to the legislative remedy working its way through the city council.

Following the press conference, Bowser took a tour of nearby alleys to see the trash management up close.  Officials had arranged the alley walk to avoid examples of the worst offenders – restaurants – and lead her down alleys in residential blocks – which were bad enough in their own right.  The tour ended at the Capitol Hill Montessori School at 215 G Street, SE, where Bowser saw rat holes near the entrance to the school and heard a parent testify to rodents in the building.

Early in the walk, Bowser carefully inspects a trash bin in an I Street alley, north of H Street.

Things got worse a little way down the alley 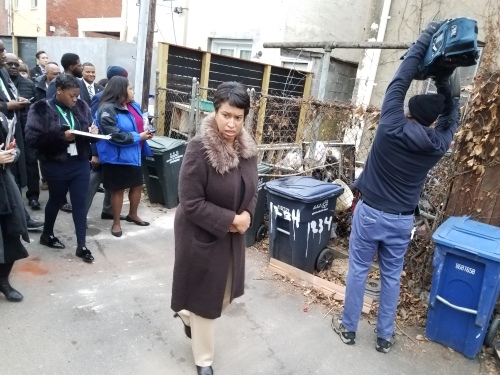 “Something has got to give.” 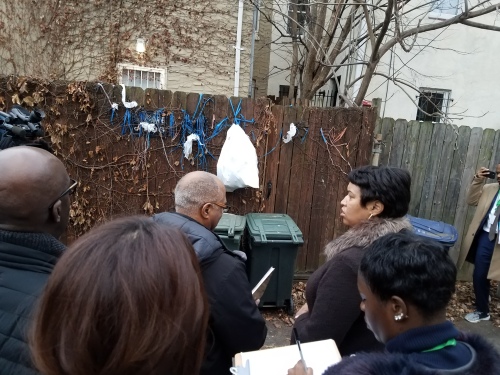 A few steps down the alley 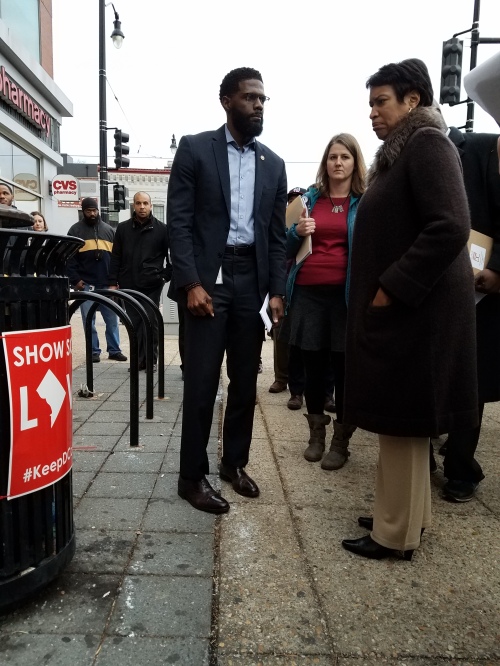 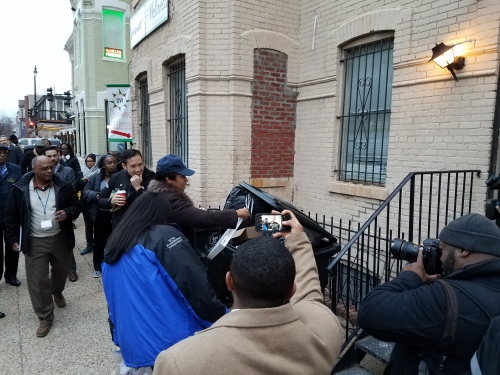 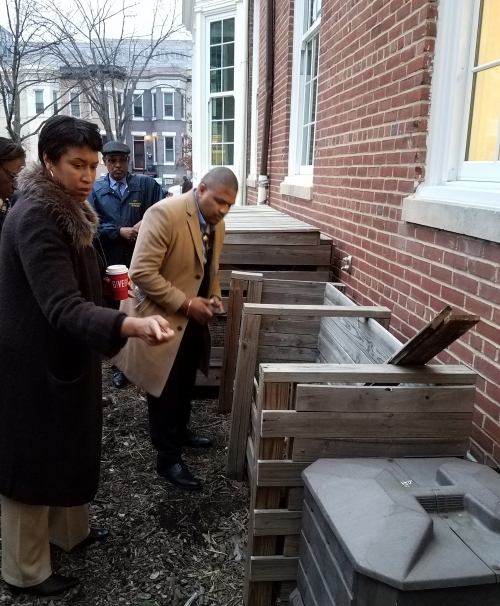 After a recounting of issues encountered during the walk and staff assertions of how each issue would be addressed, the entourage commemorated the occasion with a group photo.