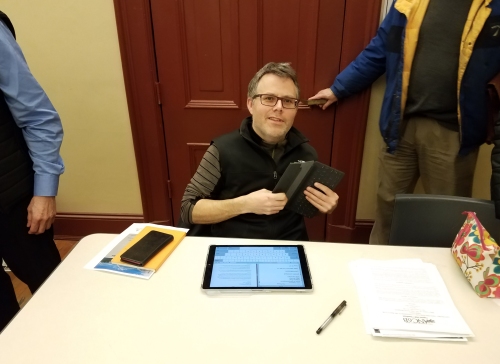 New ANC6B Chair Dan Ridge was raised in Frederick, Maryland and moved to Southwest DC for a job at NASA HQ. He moved to Potomac Avenue in 2003 and works as a computer scientist for a non-profit research institute. 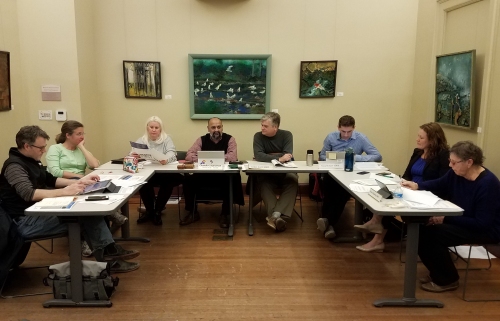 Tuesday night, at its regular January meeting, Dan Ridge, ANC6B 09, was elected Chair by a unanimous vote of the Commission.  The vote was straight forward on a prearranged slate of candidates.  Other offices were filled by the same en bloc vote.

Those elected accepted their lots with quiet resignation. These are the folks you want to have around when someone needs to go down with a ship, though ANC 6B is in no such peril itself.

The greatest peril before the ANC may be that its meetings are longer than some transcontinental flights and a cycle of meetings for a month, in man hours, is longer than some Atlantic passages by ship. Even this is not enough to let every neighbor and grievance be heard.”

ANC6B has been perhaps the most active commission in the city in terms of innovative use of their advisory role in the issuance of liquor licenses to control rats.  Retiring ANC6B Chair Chander Jayaraman – in his dual role of ANC6B Chair and Chair of the Alcohol Beverage Control Committee – spearheaded efforts to use liquor licenses to require restaurants to adopt best operating practices to control rats.  ANC6B activists prompted Ward 6 Councilmember Charles Allen to introduce rodent control legislation now pending before the City Council.

ANC’s are the liaison between the city’s residents and the legislative and executive branches of city government, who are required by regulation to give “great weight” to ANC recommendations.  ANC’s weigh in on matters regarding liquor licenses, construction regulations, public health, transportation, public space and historic preservation, among others.  Commissioners are non-partisan unpaid volunteers.