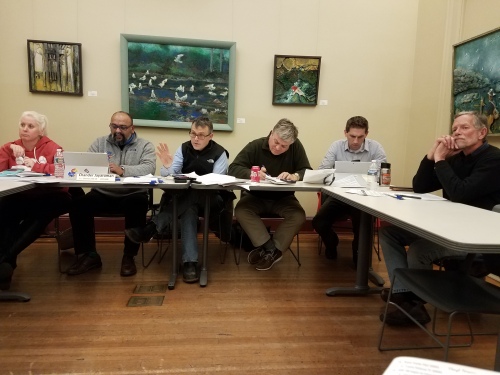 Last night, ANC6B voted 6-0 to appeal HPRB’s decision to approve a curb cut requested by the developer of Ebenezer Flats (the ten unit residential complex adjacent to Ebenezer Church at 400 D Street, SE).  The appeal came about largely as the result of the latest instance in which the Commission felt its advisory role in determining what happens in the community had been undercut by another city agency – in this case HPRB.

On February 22, HPRB approved a revised plan for the curb cut on a 6 – 1 vote, ignoring the regular process which would have sent the revisions back to ANC6B for their opinion.  (See here:  http://bit.ly/2p4FG3c)

“It doesn’t matter whether the ANC is for or against an issue,” ANC6B Commissioner James Loots said, “a secret backroom deal between the Historic Preservation Office and the developer is not acceptable.”

Loots charged that when he found out the night before the HPRB hearing that the revised plan would not come back to the ANC, he emailed the Office of Planning to strongly urge following proper procedure and defer a hearing until ANC had an opportunity to weigh in.  Loots said that HPRB “consciously didn’t notify ANC” despite the Chair being notified that the ANC had been by-passed.  He continued, “The contempt and total disregard of the process – it doesn’t matter whether you’re for or against it – the amount of effort we put into this requires they have to listen to us and they didn’t. “

Commissioner Nick Burger agreed, characterizing the HPRB process in particular as “sloppy” compared with that of the Bureau of Zoning Adjustment.  Burger – playing devil’s advocate – acknowledged that he doubted the ANC position on the curb cut in question would have been any different had the matter come back to the ANC.

The ANC subsequently voted 6 – 0 for a Loots motion to request that the Mayor’s Agent – in this case, the Director of the Office of Planning, who is the final authority in the city’s executive branch on Historic Preservation matters – conduct a review and independent hearing regarding HPRB’s failure to notify the ANC and whether factors other than those directly related to historic preservation figured in the Board’s decision to approve the curb cut.

Loots –  an attorney – stressed that his votes on historic preservation applications have been consistently informed by the law and historic preservation requirements.  The Hill Rag reported that some HPRB board members expressed concern that African American churches were being driven out of the community by lack of parking and that it was important to find ways to allow these institutions to exist.   http://bit.ly/2Dqunrg

The ANC then voted 6 – 0 for a Burger motion to send a letter to the Mayor, Council Chair Mendelson, and Councilmember Charles Allen expressing a broader concern about agencies’ failure to adhere to the ANC process and asking for a review of the legal requirements and possible amendments to the governing legislation.

Earlier in the meeting, the ANC approved language expressing opposition to the developer’s DDOT Public space application for the curb cut.  That issue will likely come before the DDOT Public Space Committee at its next meeting on March 22.