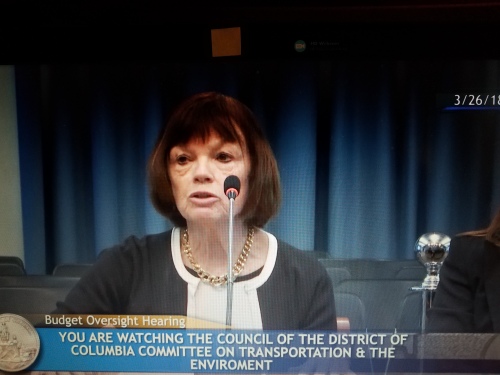 Eastern Market Community Advisory Committee Chair Donna Scheeder: “DGS’s refusal to follow (the law) is an affront to both our organization and the Council….”

EMCAC Secretary Monte Edwards told the Committee that DGS had failed to provide funds for capital improvements and security for the 7th Street open air market.

According to Scheeder the law requires the Eastern Market Manager to submit the market’s budget to EMCAC prior to the start of each DC fiscal year budget cycle.  “You will note that you have no recommendations from EMCAC because there was no prior submission to EMCAC for review.  What is required in the legislation was not done,” she told the Committee.

Scheeder said EMCAC was told by DGS’s Market Manager by email, that the budget would have to remain internal until it is released to the City Council.  Scheeder added, “DGS’s refusal to follow (the law) is an affront to both our organization and the Council….”

On Friday, March 24, EMCAC did receive was a document designated “Mayor’s Proposed Budget for the Eastern Market Fund,” but, Scheeder said, the document fails to break down the several sources of income and provided no information about what is needed for maintenance and capital improvement expenditures – nor did it include any information about what was budgeted for 2018.  Scheeder told the committee that without out having access to current meaningful budget information, EMCAC has no way to advise whether DGS’s proposed substantial rent increases for the South Hall merchants are justified.

Other issues raised by Scheeder and EMCAC Secretary Monte Edwards include the failure of DGS to provide funds for capital improvements as required by law, DGS’s slow walking of EMCAC’s advice on the need to address security for the 7th Street open air market – a target for terrorists, Scheeder said – and lack of clarity on DGS’s intent regarding funding for the prospective five year strategic plan.

CM Cheh responded, noting that she had heard the concerns of the South Hall merchants at an earlier oversight hearing on city agencies, adding, “I take it we’re not very good as government in managing operations – I will be talking to DGS about that.  We need to press for repairs and management to make this a good and effective market everybody seems to love.”

CM Allen responded, saying he wanted to focus on how to put together a strategic plan, asking, “Do I need to work with the Chair for funding?”  Scheeder told Allen, that EMCAC doesn’t know the status of any funding for the study, but before funding is allocated, “we need to have a stakeholder’s meeting to talk about the scope of the study and what needs to be included.”

Allen agreed that engaging the community would help chart a path forward and said he would follow-up with DGS Director Gillis about budgeting for the study and about EMCAC’s budget oversight role.

DGS has submitted a request for proposals regarding a strategic plan, but EMCAC has refused to consider it because their advice had not been sought on elements of the request.  See here:  http://bit.ly/2HPlMSg

EMCAC will hold a special meeting at 7:00pm in the North Hall of Eastern Market on Wednesday, April 4, to advise on the DGS proposal to contract for the development of a strategic plan for the Eastern Market Special Use area.