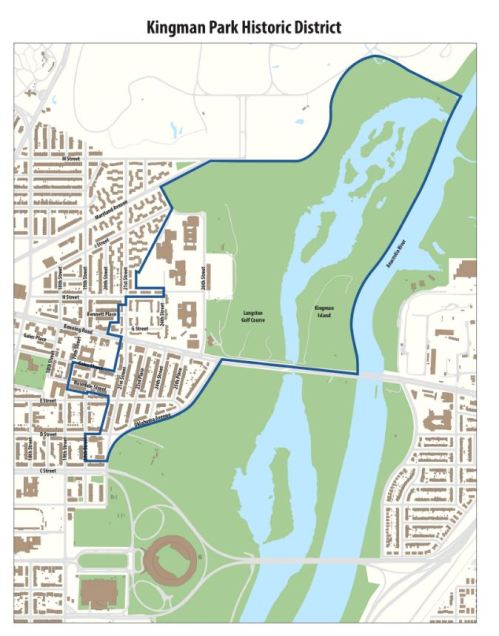 ANC6B has put CM Charles Allen, Mayor Bowser, and the Historic Preservation Board on notice that it believes that the process for designating new historic districts “is not working to serve District residents” and wants the city to review it before any more historic districts are approved.  In addition, the ANC specifically wants clarification of both the ANC’s role and the role of community support or lack thereof in the process.

The charge, detailed in a letter authored by 6B’s Planning and Zoning Committee Chair Nick Burger and passed by 5 – 1 vote of the commission, was sparked by the Historic Preservation Board’s (HPRB) recent designation of the Kingman Park Historic District, apparently over the opposition of a majority of the residents, as well as a recent series of inconsistencies in HPRB actions in ANC6B’s jurisdiction.   A case in point regarding the latter was HPRB’s failure to refer a historic preservation application to the ANC after the historic preservations staff made substantive changes to the application and referred it directly to the HPRB for approval.  In addition, the letter cited deficiencies in HPRB’s notification process and ambiguity regarding criteria for adjudicating historic preservations cases.

Regarding the Kingman Park Historic District, City Paper recently reported (https://bit.ly/2Lgwt1p) the DC’s Historic Preservation Office opinion on the changing national climate about what constitutes eligibility for historic designation – broadening the definition of beyond those neighborhoods with unique and historic architecture, to include consideration of the value and meaning that the diversity of minority communities bring to the city.

In accordance with a change in thinking, a long-standing civic group (the Kingman Park Civic Association) filed an application for the Historic District directly with the Office of Historic Preservation (HPRB’s administrative arm), by passing the local ANC, the usual route to historic district designation.  The move was controversial; in general (according to press reports) older residents of the historic black community preferred historic designation while newer residents were wary of the accompanying restrictions which would prevent them from expanding homes to accommodate growing families.

As the controversy played out – apparently without substantial outreach and notification to the community – HPRB appeared to put the onus for community engagement on the ANC7D – home to most of the proposed historic district – rather than on the sponsoring civic association which is customary.  The Friends of Kingman Park civic association, formed to oppose the historic designation, conducted a survey and claimed that 72 % of respondents in Kingman Park opposed a historic district.  Despite the lack of evidence of the support of a majority of residents, HPRB approved the application and Kingman Park Historic District came into being on June 24, though smaller than what the applicants had wanted.  It is noteworthy that HPRB is not required to take community opinion into consideration.

According to ANC7B Commissioner Bob Coomber, “We (ANC7B) heard the applicants twice, but the applicants mostly made ad hominem attacks against me and the Chair, so we didn’t have enough information to vote either time.”  ANC6A, on the other hand, claiming status since two blocks of proposed historic district was in their jurisdiction, voted to oppose the Kingman Park Historic District based on limited communication and outreach and lack of transparency in the process.

Beth Purcell, who is active in historic preservation on Capitol Hill, when asked to comment on the ANC6B’s letter, says that when people come to the Capitol Hill Restoration Society seeking information on establishing a historic district, she urges them to consult their ANC commissioner immediately and get the ANC to sponsor it.  She suggested the letter could have been improved by making a case for adding conservation districts as “another tool in the tool box.”  Purcell said she is not aware of any current plans for expansion of the Capitol Hill Historic District in ANC6B.

An attempt to establish the Barney Circle Historic District in Hill East in 2010-2011 foundered, after it failed to get the endorsement of ANC6B.

Capitol Hill Corner asked ANC6B chair Dan Ridge, who voted for the letter, to comment.  Ridge said that “the Capitol Hill Historic District is a failure at a number of things,” noting it has done nothing to restore the street car routes that made neighborhoods practical for downtown workers and nothing to support the small merchants that make a historic neighborhood work.  He says it has also failed by using the force of law to preserve architectural features that enable passive cooling and heating while doing nothing to incentivize using those features, and nothing to prevent people from filling open courts in the rear that bring in fresh air and daylight to interior rooms.

Ridge asked, “Is Barney Circle (or Kingman Park, or anywhere else in the city) facing the same existential threats that prompted the creation of the Capitol Hill Historic District? No.  Are there residents in these neighborhoods interested in conserving particular qualities of their neighborhood (like architectural forms, air, light, privacy, densities, flora, subsidized auto storage in public space, property values)? Yes.”

Ridge said that there are tools other than a historic district that could be used, citing for example, that the city could move quickly to take remedial action in Barney Circle by paying or eliminating the costs for those who wish create conservation covenants and easements.  “I signed the petition (supporting Barney Circle Historic District) last time,” he said – “I am older, wiser, and kinder now. Who could say whether I would sign another one?”

For the full text of ANC6B’s letter, visit the “Library” on Capitol Hill Corner’s homepage.