CHC went to the Supreme Court Wednesday night for the 6:15pm rally to oppose the confirmation of Judge Brett Kavanaugh to SCOTUS. There were some 400 people there. The cops were keeping people off the upper plaza. You could stand on the steps to the upper plaza as long as you were not wearing or carrying political slogans, or photographing the rally. This photo shows the crowd and the back of Senator Kirsten Gillibrand of NY (center), as she addressed the rally. (Click to enlarge) 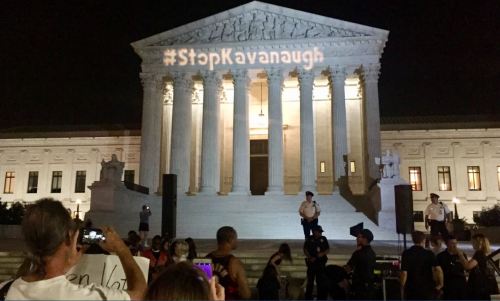 Later in the evening the crowd had doubled in size.  Someone projected #stopkavanaugh on the SCOTUS facade for a few minutes until security put a stop to it. Photo credit: Kelly M. Keegan

There was one photographer of the rally who had a privileged vantage point under the portico. (Click to enlarge)  He doesn’t look like security – probably a Supreme Court official photographer – they have a division that gets a prime position to photograph the Inaugural Ceremony.