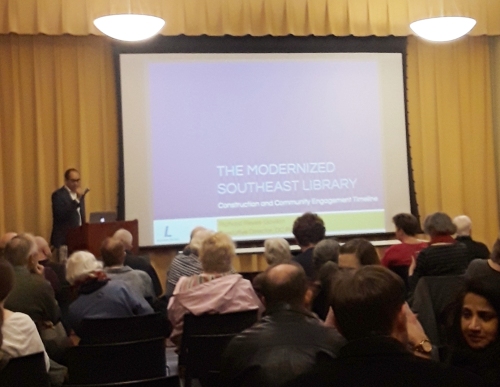 Richard Reyes-Gavilan, Executive Director of the DC public libraries, chaired the first community meeting on renovation of Southeast Library at Hill Center last Tuesday, October 30.  He told the 75 or so attendees – including CM Charles Allen – that DC Public Library has allocated $23.5 million for expansion of Southeast Library and that the planning would take place simultaneously with the planning for the redevelopment of Metro Plaza to provide maximum integration of the projects.

One major change in the plan for the development of the Metro Plaza forwarded by Amy Weinstein and Escoff Associates (see here https://bit.ly/2OcPVg7) which concerns the library is that there will be no entrance on the Plaza or construction associated with the library under 7th Street.

The need for the renovation is acute:  There are 30 public libraries in DC (including the library in the DC jail – see here:  https://bit.ly/2qq3rDM ) and Southeast Library is the seventh busiest.

Reyes-Gavilan projected a Power Point illustration depicting the schedule for the modernization project.

In 2021 Southeast Library will close for up to two years for construction.  As of now, there is no plan for an interim library during the closure because funds for a temporary location would necessarily be deducted for the funds for redevelopment.  Residents will be encouraged to use the Northeast Library.

The strategy for bringing the community into the process involves five community meetings, focus groups to solicit input, internet surveys and commentary, as well as consultation with the ANC6B and local civic organizations.

329 16th Street, SE, Zoning Adjustment – special exception to construct a third-story and rear addition to a principal dwelling unit and convert the dwelling into a flat.

Agenda items could include:

Presentation:  Department of Public Works – Celeste Duffie.  The discussion will focus on residential, commercial and public collection of trash, recycling and composting.

Resolution on Resident Only Parking for ANC 6B04.

Grant request from Miner Elementary School in the amount of $899.00 towards the purchase of seven (7) laptops for students.

Dangerously Delicious Pies, 1339 H Street, NE – proposed amendment to the Settlement Agreement to allow the summer garden to close at 12:00 midnight on Sunday through Thursday nights, and 2:00 am on Friday and Saturday nights and the nights before federal holidays.

Dae Ah LLC t/a Capitol Supreme Market, 501 4th Street, SE, Retailer’s Class B liquor license – Grocery; Request to update the existing Settlement Agreement to expand hours of operation and sale of alcohol as follows:  Mon-Sun 7am – 11pm; and the requested Hours of SALES of Alcohol are: Mon-Sun 9am – 11 pm.

Comprehensive Plan updates – Review of recent supplemental report from the Office of Planning on the Comp Plan’s Framework Element.

Jason R. Secrest, Commander of the Kenneth H. Nash American Legion Post #8 at 224 D Street, SE, has announced the annual Veterans Day Ceremony, which will be held this year to mark the 100th Anniversary of the end of WWI.  The Ceremony will be held in Forger Park at 11:00am.  The Post will hold a reception in the Legion Post following the event.