DC General Buildings on Track for Demolition by Next July 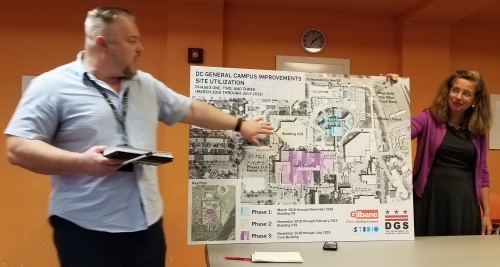 Some two dozen residents turned out for the Reservation 13 update.

DC General Buildings on Track for Demolition by Next July

The ANC6B Hill East Task Force (HETF) met last Monday night at St. Coletta, and some two dozen Hill East residents showed up to hear an update on the development of Reservation 13.

Department of General Services’ Jeff Licklider, project manager for DC General Campus Improvements, provided an update on the demolition of the six buildings comprising the campus.  The six buildings are the Core which includes Buildings 1 – 4, and Buildings 29, and 9 (See first photo above).

Those in the audience hoping to hear from the Deputy Mayor’s Office for Planning and Development (DMPED) as to what happens next were disappointed.  Hill East Task Force Chair, Denise Krepp told residents that DMPED had informed her at 5:45am that morning that their top Reservation 13 people would not be able to attend.  Krepp’s efforts to secure the attendance of another DMPED rep – both through DMPED and the Mayor’s Office – were fruitless.  She told residents, “If we want DMPED in the room, it’s going to be on us.  We want to know what the city’s going to do with this property.”

Once DC General is gone, Reservation 13, now in Ward 7, is one of the city’s most valuable undeveloped properties, assuming the likely relocation of the DC Jail.

Developers Chris Donatelli and Blue Skye’s Scottie Irving were on hand, and Donatelli said the developer has completed excavation of the first building – 262 apartments, 13,000 square feet of retail, and 115 underground parking spaces.  Pouring concrete will begin shortly and continue for six months with completion of the first building expected in 18 months.  The developer has not broken ground yet on the second building which will be constructed in tandem.  That building has 91 apartments and 10,000 square feet of retail. (For project details announced in October 2014 see here:  https://bit.ly/2OZ8fKj )   Scottie Irving fielded questions from community members about the company’s hire-locally commitment.  ANC6B Commissioner Chander Jayaraman urged the company to intensify efforts to hire and train residents from the community.

Much of the discussion concerned the impact of construction traffic on Hill East residents.  Donatelli said he was fully aware of concerns and pleaded with residents to give him until the next HETF meeting to solve the problem of truck drivers making individual decisions about how to get to the construction site rather than following the traffic plan.

ANC6B Commissioner and Chair Dan Ridge urged DDOT’s Amada Stout and MPD to explore the possibility of using Water Street which runs along the Anacostia River as an alternate route for construction vehicles going to and from the construction site.  Ridge said that the 2010 earthquake left some $10 million in damage to reinforced masonry construction in Hill East, and vibrations from trucks exacerbate the unrepaired damage.  The two agencies agreed that the suggestion “looks good on paper” and pledged to look at the possibility and follow up at the next HETF meeting.

For their part on enforcement of construction traffic violations, MPD officials said they need help from residents to narrow down when and where violations occur “so we can witness them.”  In response to some residents who expressed a desire to take more aggressive and direct action, officials discouraged them, saying “We don’t want a situation where poor decisions are made out of frustration.  We need a safe way to engage construction workers” suggesting action similar to that of the Orange Hat Patrol activity.

Krepp has tentatively scheduled the next Hill East Task Force meeting for December 10.