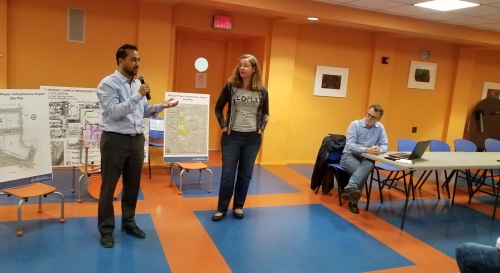 Monday night, Hill East Task Force held the latest in a series of meetings, summoning city agency officials to explain the city’s plans for the future of RFK and Reservation 13 and the Mayor’s lack of transparency thereon.

Coincidentally, the meeting fell three days after the Washington Post published an article stating that the Mayor was working behind the scenes with Redskins owner Dan Snyder, Congressional officials, and the Trump Administration to insert language in a must-pass Congressional spending bill that would, clear the way for a new stadium for the football team.  That idea is strongly opposed by Ward 6 Councilmember Charles Allen as well as many residents in Hill East.  (See text of proposed language below.)

It fell to DMPED representative Ketan Gada to appear before the Task Force to answer questions about the Post article, which appeared to describe the latest in a series of undisclosed plans for development of the valuable river front land, including bids for the Olympics and for Amazon’s HQ2.

Gada replied, “The Mayor is not doing anything.  Since DC United moved to its new stadium RFK has had very little use…it has become revenue obsolete…underutilized.  The options we have are to extend the lease or to acquire the land from the National Park Service.”  He envisioned a future commercial use for the site involving housing and retail as well as recreational uses.

Asked by Krepp if the Washington Post is correct and that the city wants to open up the lease for a new stadium. Gada replied that it was a question for the Washington Post, adding, “If the Redskins want to come they could have come yesterday.”

Referring to a March, 29, 2017 letter from the Mayor to the President asking the administration to consider a lease extension for the RFK site or a land transfer so the land can be put to a more productive use, Gada said “we prefer to acquire the land, but there is no ongoing negotiation or dialogue happening.”

Gada pleaded ignorance on other questions, including whether the mayor is meeting with anybody on RFK (I’m not aware of any contact – I’m not privy to that information) and whether Events DC (the city agency holding the lease on RFK) employs any outside lobbyists to further the Mayor’s agenda,

Unsatisfied with the response, Krepp stated she intended to send an email to the Washington Post asking for clarification on their story regarding the Mayor’s engagement and outreach on RFK, adding, “We’ve not received facts from the Mayor – we’ll move forward, and keep going.”

Krepp subsequently sent the email, copying multiple city officials and news agencies.  The message read in part: “…a DMPED representative told Hilleast residents tonight that Mayor Bowser is not working with Dan Snyder and House Republicans to include language in the appropriations bill.

This information was shared at the Hilleast Taskforce meeting and the DMPED representative was Ketan Gada, the Director for Hill East District Redevelopment.

Residents repeatedly questioned Mr. Gada about the Mayor’s involvement.  These questions were based on the recent Washington Post story written by Mike DeBonis and Liz Clarke.  The story states that Mayor Bowser is working with Dan Snyder and House Republicans to extend DC’s lease of the RFK property and to possibly expand the use of the property to non-sports related activities.

Each time he was questioned, Mr. Gada claimed lack of knowledge and denied that Mayor Bowser was speaking with Congressional representatives.

Given the repeated denials, I’m emailing tonight to seek your assistance.  Please help us understand who Mayor Bowser is talking with in Congress and what help she is requesting.  I’m making this request because Hilleast residents don’t believe the story that was spun by DMPED tonight.”

Afterward, CHC asked ANC6B Chair and Hill East Task Force member Dan Ridge for his reaction to Monday night’s meeting.  Ridge said, he thought that Gada had “used his time to mount a defense of DMPED.  Secrecy is part of the trade craft of the Bowser administration.  When you start with secrecy – everything ends up being secret by default.”  He said he feared that opening up the site to retail would mean theme park retail, allowing Dan Snyder to co-opt revenue, adding, “I don’t think they’re serious about housing.”

On Tuesday night, Krepp reported on the previous evening’s Task Force meeting to the full ANC6B, again questioning the veracity of Mayor Bowser on RFK and on plans for Reservation 13.  “I’m frustrated,” she said, “the nicest thing I can say about the Mayor is ‘liar, liar, pants on fire.  The Mayor has wasted our time and lost our trust.  I’d like to know what she’s going to do to regain it.”

ANC6B Chair Dan Ridge noted that the language proposed to be added to the Congressional spending bill had been made public that day by Martin Austermuhle, WAMU reporter (see below).  Ridge said the language almost looks reasonable, but that its far from clear that Events DC is the best manager to carry out the listed potential uses of the site – Events DC doesn’t do housing – what they do is events and retail supporting events. 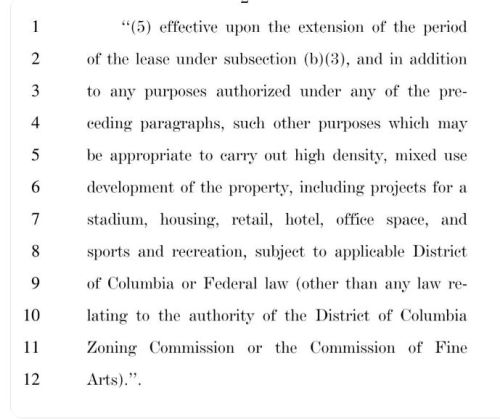