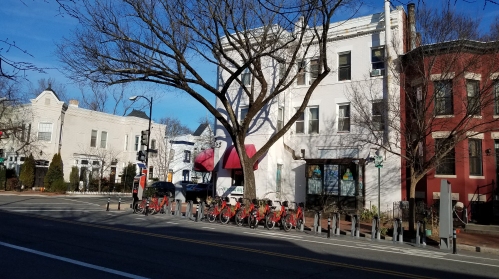 Residents near the intersection of 11th and C SE say that despite 160 signatures (many from customers of the adjacent dry cleaner) opposing the installation pictured above, DDOT brushed aside their concerns and installed the Bikeshare rack anyway.

The issue came before the ANC6B Transportation Committee in November where several neighbors and the owner of the dry cleaning establishment protested the proposed installation, citing the loss of parking, the impact on the dry cleaner who has been using the non-designated space in front of his business as a loading zone, and the aesthetics of having a station in front of a residence.  After hearing the concerns, the committee bucked the issue up to the full ANC6B meeting a few days later which heard protests from other neighbors who added objections based on safety and lack of notification.  In addition, concern about the loss of property value seemed to have figured into the opposition.  The Commission subsequently voted 7 -3 to support the bike station.

DDOT and two ANC commissioners from the affected single member districts had surveyed eight potential sites for a new Bikeshare rack to fill a gap in stations centered near 11th and C Streets.  DDOT determined that this location was the best alternative based on safety, proximity to bike infrastructure, distance from other stations, and “its minor impact on resident parking.”

On December 13, one resident, saying she was writing on behalf of some 30 concerned neighbors, wrote to Jeff Marootian, Director of DDOT, formally contesting the effort to place the Bikeshare based on lack of due process and safety.  DDOT, replied that an appropriate response would be forthcoming to “everyone who has inquired or raised concerns about this bike share station installation.”

ANC6B Commissioner Jennifer Samolyk, whose single member district is near the Capitol Building, weighed in, emailing DDOT that neither she nor the neighbors had been given adequate notice and said “it is very disheartening that DDOT is rushing to get this bike share installed without adequate debate.  Honestly – I was shocked at the ANC meeting by the presentation by DDOT.  It was almost like if you don’t say “yes” right now- we will put the bike share in another ANC.  It was a take it or leave it ultimatum.”  Commissioner Denise Krepp from Hill East wrote Marootian chastising DDOT for a dismissive attitude about residents’ concerns.

Newly elected ANC6B Corey Holman, who often opines on transportation and parking issues, posted a couple of tweets supporting the installation, one showing a graphic which he said demonstrated the need for the Bikeshare rack.  One of his Holman’s Twitter followers asked:

“Did the owner that owns the cleaners have a problem with it?”

Holman replied, “Yes, the dry cleaner and the property owner both had issues, because parking of course. This took away two non-legal parking spaces that were being used for both loading and all-day parking. 19 bikes or 1 car was an easy choice for me in committee and full ANC supported 7-3.”

Holman told CHC, “Filling in the gaps in the bike share network is a huge win for residents and visitors of 6B and I hope DDOT continues to find appropriate sites to continue expanding the network.”

The issue is the latest of the transportation and parking issues which promise to dominate the public space discussion in coming months.  Last Wednesday night, ANC6B’s Transportation Committee approved a plan to solicit recommendations from 6B’s commissioners locating dockless bike racks in their SMDs to accommodate city requirements that dockless bikes must be locked between trips.