ANC6B’s Working Group on Barracks Row met on Tuesday night on the 7th Floor of the Hine Project. 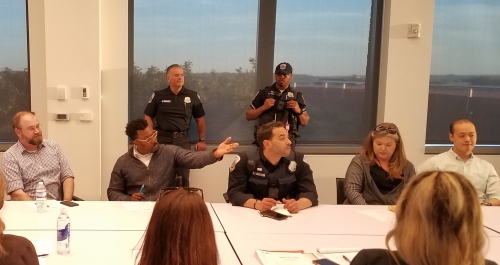 A Tuesday night’s meeting of ANC6B’s Barracks Row Working Group, MPD First District Capt. Aubrey Mongal threw cold water on the idea for an MPD substation on Barracks Row.  The proposal had come out of the first meeting of the Working Group last month, and Barracks Row Main Street had gathered a petition of some 500 signatures supporting the move.

Mongol said, flatly, “We don’t sponsor that.”  The police abandoned the idea of mini-stations years ago, he said, because officers spent too much time inside and got completely away from the street.  He said that the presence of a police station is not a deterrent and will not put more officers on Barracks Row – “We deploy on the basis of violent crime – not on quality of life.”  He added, “We don’t have violent crime on Barracks Row…we have violent crime near Nats Stadium in SW and on H Street.”

While dampening the Working Group’s enthusiasm for a substation, MPD announced a new initiative to deal with what it sees as the primary problems on Barracks Row – panhandling and the side effects of substance abuse – especially on the troubled 400 block.  The hoped for salvation comes in the form of Officer R.J. Mazloom (Maz), who is now the “Barracks Row Bike Cop” and whose job is to clean up the street’s noisome problems.  His approach will be a mixture of old-fashioned neighborhood beat policing and social work engagement, and his aim is developing a rapport with denizens of the street, being as inclusive as possible.  One goal is to lay down ground rules for behavior using conversation and incentives to personalize the accountability expected of habitués of the block.  Mazloom says he even engages the supplies of K2 – gathering intelligence which “hard charging officers will use in another way.”

He describes his approach as a compassionate one, but one that discourages panhandling.  He advocates “building an economy of positive engagement and work on that model.”

Officer Ulysses Fernandez owns the morning shift on Barracks Row.  Fernandez, well known to many residents, says K-2 is a very bad drug and MPD is trying to get control of it.  In response to a question from ANC6B Chair Chander Jayaraman, he said that there are 7 to 10 regulars (not necessarily homeless) on the 400 block and noted an uptick in K-2 related activity in the last 3 to 6 months.  Fernandez says he works closely with Community Connections to help determine whether substance abusers are their clients.  He points to the limited ways agencies can help a substance abuser.  Often, first responders called to administer aid to an unresponsive person find a fully conscious person when they arrive, one who declines hospital treatment, since the effects of the drug last some 15 minutes.

Jayaraman asked about the effectiveness of making arrests to control the drug activity on the block.  It turns out that there are clear disincentives for making arrests of suppliers of K-2.  Capt. Mongal replied that an officer needs a probable crime in order to conduct a search of an individual – and the officer needs to witness the crime, rather than take someone’s word for what they saw.  When an officer makes an arrest it takes him off the street for a period of time, and the arrestee is back on the street the next day.  Another disincentive is that it’s rare that a substance recovered in connection with an arrest will test positive for being controlled substance, as the formula is continually changing in order to stay ahead of the law.

Mazloom said that MPD presence makes a block “hot” and makes people move away – people who don’t want to be “hot” move somewhere else.  ANC6B Commissioner Brian Ready who chairs the Working Group along with co-chairs on the business side of Barracks Row, said that pushing the problem somewhere else was in opposition to the inclusive DC ethos, and warned of opening the door to unintended consequences.  Mazloon seemed to acknowledge an acute awareness of the difference between enforcing the law and over-policing.  He said, “We walk a fine line. We have to.”

One of the goals of the Working Group is to create a marketing plan for Barracks Row, and Working Group Co-Chair and business owner Gaynor Jablonski (The Ugly Mug) is taking the lead on creating a comprehensive marketing plan for 8th Street as well the commercial corridors around the Metro Plaza.  Referring to the effectiveness of marketing plans being employed by competitors – H Street, Capitol Hill Riverfront, NOMA, The Wharf – Jablonski said that no one sells our area like these others sell theirs.  Jablonski is heading up a Discovery Committee to work on a marketing plan and looking toward engaging a firm to provide public relations and articles on a monthly basis. The committee will discuss costs and how to make it an ongoing effort – he says, “We can’t wait, because were becoming less and less relevant.

The Working Group’s agenda also included presentations from two organizations providing outreach to the homeless:  Capitol Hill Group Ministry and Community Connections.  Both attempt to connect the homeless with the city’s homeless programs, and both have staffers who work directly with the homeless on 8th Street and the city, though Community Connections outreach ability will be reduced at the end of the month owing to lack of grant funding.  Group Ministry concentrates on homeless families.  They also have an outreach team that checks on the welfare of Capitol Hill’s homeless, who tend to be single individuals, and provides assistance at Shirley’s Place – the Group’s Day Center at 1338 G Street, SE, which is open weekdays, 8:00am until 6:00pm.