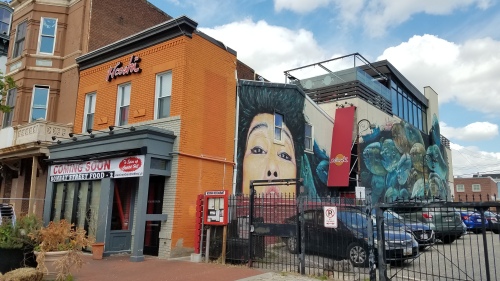 When one door closes, another opens.  And so, Bombay Street Food moves into the space formerly occupied until last January by Garrison on Barracks Row, at 524th 8th Street – as first reported by Eater and The City Paper.  The new restaurant is sister to the popular Bombay Street Food in Columbia Heights which opened just last December.

Bombay – now Mumbai – is known for its variety of relatively inexpensive street food hawked around the clock to a passionate cosmopolitan clientele. We are familiar with many of the offerings, but one of the things that distinguishes is the inclusion of the spice-laden Indo Chinese dishes which started appearing on Bombay streets in the 1980s and was incorporated into the city’s cuisine.

The most popular street food in Bombay is vada pav – a spiced potato puff slider – which may not sound like much, but Anthony Bourdain, is holding one in the tribute portrait on the wall of Bombay in Columbia Heights.  You’ll be able to try one for $7.  Here’s a link to a photo of the sandwich and the recipe if you want to try your hand at it: https://www.mygingergarlickitchen.com/vada-pav-recipe/

Perhaps the second most popular are a variety of kati rolls – an Indian flatbread folded around a filling (chicken, lamb, or cottage cheese along with egg, tomato, onion and ginger/garlic chutney).

The restaurant is the creation of restaurateur Asad Sheikh, a Bombay native.  He opened three Curry Mantra locations, London Curry House and 1947 in Northern Virginia before selling out and moving on to the Bombay in DC.

Not clear on how soon they hope to open but when they do, diners in the 75 indoor and outdoor seat venue will be looking at the same menu featured in Bombay in Columbia Heights. Here’s a link:  http://www.bombaystreetfood.us/our-menu.php