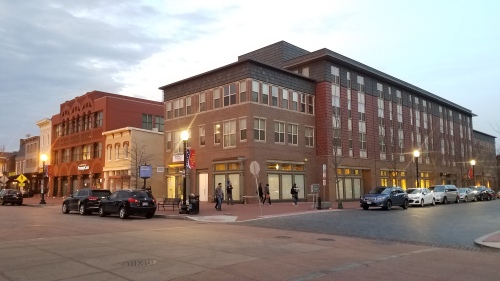 EAT BRGZ will own the Northeast corner of 7th and C – the owner hope to open in June.  See more menu details below. 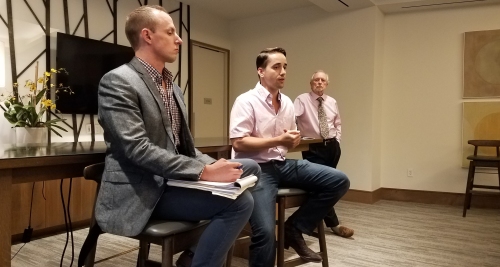 EAT BRGZ owner Brandon Gaynor, center. At right is ANC6B Commissioner Jerry Sroufe, in whose single member district the restaurant will reside. At left is attorney Matthew Minora, charged with shepherding the liquor license application through the approval process.

Some 40 nearby neighbors and Hine project residents turned out to express concerns about what the restaurant might bring to the neighborhood besides burgers, i. e., noise, rodents, odors, trash and a clashing aesthetic.

Owner Brandon Gaynor, introduced his concept, engaged residents, and assured them that he had anticipated their concerns or would move to remediate them as they arose, stressing his desire to be a good neighbor and a part of the community.

The neighbors’ greatest concern – aside from the on-going battle against rodents drawn to 7th Street restaurants which residents have called upon the city to address with limited success – appeared to be noise; noise  well into the night from up to 60 patrons eating burgers and drinking beer seated outdoors.  The restaurant’s seating is primarily outdoors – seating for only 25 customers will be within.

Rodent concerns have been minimized in this case by indoor, temperature controlled, trash storage.

However, heightening the concern about – as one attendee put it, “raucous behavior” – the applicant is asking to serve alcohol until 2:00am.  Hours of operation and for serving alcohol are often scaled back by a voluntary settlement agreement in order to get ANC6B’s endorsement of the liquor license.  ABC Committee Chair Chander Jayaraman asked attendees to suggest appropriate limits for alcohol service before the ABC Committee considers the license in May.

Gaynor offered assurances that he had hired a sound engineer to address potential issues, and cited one planned mitigating measure – the use of broad umbrellas in the outdoor seating area to help contain noise of conversations.  There will be no music from outdoor speakers.  Residents appeared skeptical that this would fully address their concerns, and residents and Jayaraman urged Gaynor and his team to think more broadly about the issue.

EAT BRGA is a new model and the restaurant is Gaynor’s first foray into the hospitality industry. The concept setting it apart from its peers involves serving a “complex burger” – mixing and blending the ingredients into a locally- sourced chicken, beef, or veggie patty before cooking. Two examples Gaynor mentioned were a Greek burger and a Mexican burger. Buns, produced locally, will be delivered fresh daily. Also on the menu will be three beers and three wines as well as proprietary high protein, reduced calorie, all natural shakes – which Gaynor called a “little bit better for you product.” The restaurant will not offer table service or glassware – and will use all recycled material.

Gaynor anticipates 15 seats in front of the restaurant on Seventh Street and another 45 banquet seats  – read high end aesthetically pleasing benches and tables – alongside the restaurant on the sidewalk on C Street. The outside areas will be enclosed by planters and perhaps ropes.  Gaynor hopes to open in July.

One questioned the degree of Gaynor’s commitment to helping the community.  Gaynor cited the long history of contributing to charities nationally and internationally, and, referencing a local program under which restaurants donate food to homeless shelters said “will we will be part of that.”