Frager’s, mixed use retail/residential progress is close to being finished. Units are being sold and Frager’s Hardware opened last week. View from 12th and Pennsylvania Avenue  looking Southeast, May 2.

Frager’s – The original Frager’s site on the 1100 block of Pennsylvania Avenue SE, will  provide 34 condos. One, two and three bedroom units are intended to accommodate families. 10% of the residential space is required to be designated for affordable housing, under Inclusionary Zoning requirements. Frager’s Hardware will occupies 8,500 s.f. of retail space and an additional 7,600 s.f. of space will be for “community friendly” retail.  Chef Kevin Tien’s new restaurant Celine’s is slated for the prime corner spot and the buildout is underway, though it’s scheduled spring opening looks more like it will happen this summer.

Watkins Alley is under construction at 1309 E Street, SE. View from E Street, SE, looking Southwest, on May 2.

Watkin’s Alley – will provice 44 units, (uncertain whether condo or apartments) including 8 – 2 BR flats, 6 lofts, and 1 carriage house. Five units (3 townhouses and 2 flats) will designated affordable housing units under Inclusionary Zoning requirements.  This view is from E Street, looking south, and fails to capture much of the project which is in the center of the block – see next depiction.

Here’s another view of  Watkins Alley looking Northeast, showing the scale of the project.  The former Safeway is top center.  This view shows the backs of the units in the previous rendering, barely visible between the green roof tops, center and left.

Lockwood – 1300 Block of E Street, SE. View from mid-block on E Street, looking Southeast, on May 2.

Lockwood – Lockwood will provide 145 boutique apartment units: 1, 2, and 3 BRs. Thirteen of the units will be affordable under Inclusionary Zoning.

Capitol Courts is under construction at 1234 Pennsylvania Avenue, SE. View from mid-block looking Northeast, May 2. 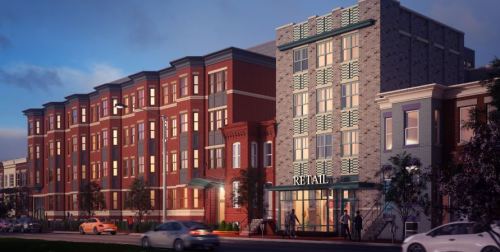 Capitol Courts – the former site of the Frager’s Garden Center – a mixed use building that will contain 119 micro apartments and a few 1 BRs. The plan includes 5,000 s.f. of ground floor retail. Ten percent of the residential space will be designated for affordable housing under Inclusionary Zoning.  This view is from Pennsylvania Avenue, looking Northwest.

The mixed use building at 1401 Pennsylvania – Blackbird – is moving right along. View from the median strip at 14th and Pennsylvania, looking Southeast. May 2.

Blackbird – A mixed use residential/retail building under construction will provide 167 apartments and 18,000 s.f. of retail. Ten percent of the residential space will be for affordable housing, with a large portion of that for family units: 4 – 3 BRs, 2 studios, 2- 1 BRs and 2- 2 BRs.  The Neighborhood Restaurant Group has announced plans for a “culinary clubhouse,” a multi-restaurant, multi-bar concept – “The Roost” – for the building’s ground floor retail space.  Developers expect delivery of the project fall of 2019.

“Beckert’s Park” –  Will provide 329 apartments, a new 60,000 s.f. Safeway, and several thousand additional s.f. of community friendly retail. The developer says that 70% of the units will be studio and 1 BR apartments and 30% will be two bedrooms. A number of penthouse apartments will be set back on the roof. Rents will be calculated at a cost of approximately $3.25 a square foot – meaning that a small 500 square foot studio apartment will rent for between $1500 and $2000 a month. Ten percent of the units will be affordable under DC regulations, at 60% of AIM – average median income. 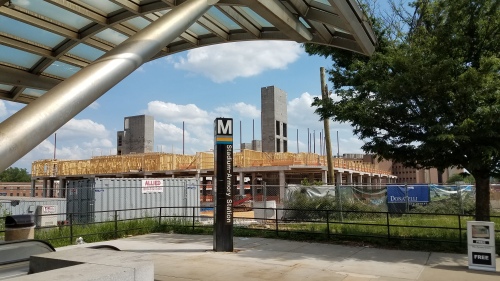 The first of two mixed use projects is underway on Reservation 13. View from 19th Street near the south entrance to the Stadium Armory Metro canopy,  looking Southeast, May 2.

Reservation 13 – Two parcels are being developed. The larger south building is out of the ground as shown in the previous photo; work on the smaller north building will begin in about four months, under a phased development plan. The total number of apartments in the two buildings is 353 – 262 in the south building and 91 in the north building. 106 of the units will be designated affordable. In addition, the project will provide 22,000 s.f. of retail.