DGS’ latest concept – May 3, 2019 –  for the redesign of Eastern Market Metro Park/Plaza.  The design reflects the modifications meant to address recommendations by the Commission of Fine Arts. (click to enlarge)

This is the April 3, 2019 design which the Commission of Fine Arts asked DGS to modify. 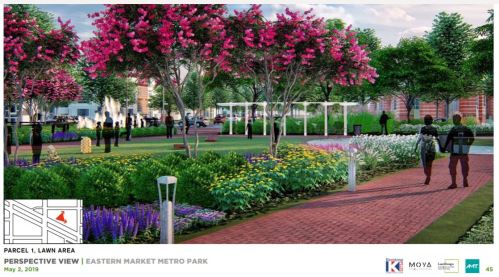 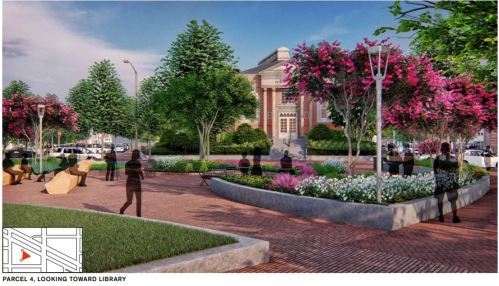 According to Donna Scheeder, Chair of the Eastern Market Community Advisory Committee, an additional $7 million for continued construction of the redesign of the Metro Plaza/Park received preliminary approval by the City Council in a vote on the FY 2020 budget earlier this week.  A vote on final passage comes next week.

In addition, today – Thursday, the Department of General Services (DGS) received approval from the Commission of Fine Arts (CFA) of the tweaks to the design plan to address concerns raised by the CFA last month when the plans were sent back to the design team’s drawing board.

And earlier this week, DGS revealed its modification of the rejected April 3 version of the plan for redesigning the Metro Plaza/Park at a pair of meetings on Monday and Tuesday.  The main recommendation of the CFA was that Parcel 1 (playground) and Parcel 4 (Metro canopy) should be treated differently but complement each other, taking into account the residential orientation of the first and the commercial orientation of the latter.   Here’s a link to DGS’ April 3 Community Presentation which includes the concept drawings of that date:  http://bit.ly/2Hkni0u DGS has not yet posted the newest concepts on its website.

He said the timeline remains unchanged:  The interim playground funded by developers of the Hine project will be placed in June.  Construction on the redesign will proceed in phases: in Phase One, construction will begin in December on the permanent playground on Parcel 1 and landscape design changes on the eastern end of Parcel 4.  In addition, Phase One will see delivery of fully permit-ready construction drawings for the project.  Schematic drawings – actually giving definition too forms, colors, furniture – will be done late spring or early summer and presented to the community at the next community meeting in June.  In late summer or early fall, the DGS plan will go back to the Commission of Fine Arts for final approval.

The second meeting occurred on Tuesday, when The Eastern Market Metro Plaza Advisory Committee met with DGS to provide feedback on the design.  The Advisory Committee is made up of community stakeholders and representatives from CM Allen’s office and ANC6B.

Susan England of the design team explained some of the changes made in response to the CFA’s concerns.

Almost all trees the trees on the site will remain, and more will be added.

The water feature was relocated from near the Metro entrance to the eastern end of Parcel 4.

Visual relief – lawn panels and trees providing more porosity – was added to address criticism that there was too much hardscape and to address the heat island effect.  Lawn panels will be raised on one end to provide seating, and then slope to grade.

More space was added for use of Southeast Library.

The connection with Barracks Row was strengthened by making access more open and generous.

The 10’ X 10’ kiosk was moved to make it more visible and more useable as a way-finding location.

A possible location for public art was established at the corner of 7th and Pennsylvania Avenue, contingent on WMATA relocating bike lockers and bike racks currently occupying that space.

In addition, Project Manager Mullen told the Advisory Team that the plan for Parcel 4 anticipates space for a bus stop on Eighth Street at the east end of Parcel 4, adding that any change in the traffic plan will depend on approval by the Department of Transportation and WMATA.

Shapes have been modified and curves added to make a more organic feel.

The bio retention area has been made more useable.

Two separate areas of the 7,300 s.f. playground have been established to accommodate two sets of equipment for two age groups.

DGS is meeting with the Capitol Hill BID to discuss a consolidated maintenance and programming role for the Plaza/Park.

DGS received some push back from the Advisory Team at Tuesday’s meeting on the concept of a kiosk that would sell food and drink.  The concerns came from businesses who could suffer from the competition, as well from stakeholder who see the potential for generating litter and trash.  Some participants favored eliminating the kiosk entirely and expanding the hardscape to accommodate a structure with the flexibility to serve as a performance platform.

Another issue involved traffic flow, specifically the route for a turnaround for the Circulator Bus, the closing of the two D Street cut-throughs (outside Dunkin  Donuts and Trader Joe’s), and moving the bus stop from in front of Starbuck’s to the east end of Parcel 4.  All of these are issues for DDOT and WAMATA, though Mullen, as noted above, said that the DGS plans will accommodate a move of the bus stop if DDOT agrees to make the change.  Some members of the Advisory Committee expressed a desire to meet with DDOT and WMATA before they make a final determination.