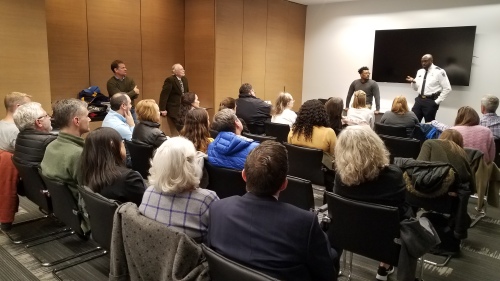 Last night some residents of the 600 block of D Street, SE, asked why it took MPD and city agencies months to remove an encampment behind the CVS at 7th and Pennsylvania Avenue, even as resident complaints and evidence of illegal activity at the site mounted.  The occasion was a community meeting hosted by MPD in the aftermath of removal of the encampment which had become a nuisance to residents near SE Library.  The complaints to MPD dated back to early September, but it took police and the city until November 14 to resolve the issue.

There were multiple reasons given for the delay.  Lt. Damion Taylor of MPD’s 1st District cited confusion over who owned the space occupied by the encampment – whether it was public or private.  This appears to be why MPD was initially reluctant to engage residents of the encampment because of the belief the camp was on public space and thus under the jurisdiction of the Department of Health and Human Services (HHS).  In addition, there appeared to be a lack of coordination among city agencies which were involved in trying to get the tent removed and a failure of communication not only between agencies, but between residents and city officials who failed to return phone calls or follow up on complaints.  Finally, a lack of cooperation and concern by CVS corporate officials contributed to the process which ended up tying the city’s hands.

Taylor said that once it was clear to him that drug activity was taking place at the site – thanks to a video supplied by a resident – MPD began an investigation in early October.  At the same time, were complaining about being threatened by occupants of the camp.  Subsequently, Parking Enforcement officials trying to ticket a vehicle associated with the camp were being intimidated by the camp’s residents.

Jessica Smith from the Office of the Deputy Mayor for HHS told the attendees that the process of removing an encampment on public land is a prolonged one involving first a week to 10 day period when the city assesses the needs of the occupants of a camp and tries to enlist them in city programs and provide other services.  If that fails, the department posts a 14 day warning that the site is subject to dismantlement.  If – as what happened in this case  with the city’s attempt to remove the camp on November 5  – the tent dwellers take down the tent before the city does, and then puts it back up, the process has to start over.  Complicating matters, HHS cannot remove an encampment from private property.

It is not clear how or when MPD learned that the tent had been set up on private property.  But once that happened, and when CM Charles Allen pressured MPD for the tent’s removal in an email to Lt. Taylor, MPD visited the site in mid-November, ordered the removal of the tent and began issuing bar notices, barring anyone associated with the tent from CVS property under threat of being charged with unlawful entry.  Taylor told attendees that since then, every MPD shift checks on the encampment site to assure the tent has not gone back up.

Some residents thought the explanations were not sufficient, pressing for answers to why once drug activity was established it still took more than a month for police to act.   Asked for his reaction to last night’s meeting, Adam Belmar, a resident of the 600 block of D Street expressed his frustration and said, “As a business owner and resident, I’m very concerned that the Mayor’s Office and MPD are not coordinating an approach to deal with public safety.” And, as one of the residents whose calls were not returned, former ANC Commissioner Ivan Frischberg said there was “a total lack of coordination, and it comes back to the Mayor’s Task Force [HHS].  I called and never got a call back.  The [standard response] of a call back within 24 hours is a kind of joke.  The city needs to respond – otherwise you get a meeting like this where people are genuinely pissed off, and rightfully so.”

Residents say that drug activity continues around the SE Library and in the alley on the on the 600 block of D Street.  Taylor said MPD’s narcotic squad continues to investigate activity in the area and urged residents to call 911 to report illegal or suspicious activity.  A follow-up meeting will be scheduled – perhaps next month – at which Taylor expects CVS officials to brief the community on measures they have taken to prevent potential use of their property for illegal activity.