The Week Ahead… & The Samaritans of Eastern Market Metro Park 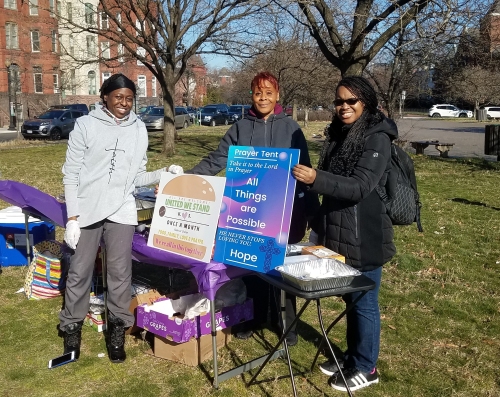 Lolita Johnson at left started serving free lunch to all comers once a month in the Eastern Market Metro Park as a personal act of kindness.  She is pictured here with her is her mother, Janice Johnson, and friend, Christina Brown.

Every fourth Saturday Lolita Johnson and her family and friends set up free lunch for all comers in Eastern Market Plaza Park on the north side of Pennsylvania Avenue.  Johnson says that last September she was religiously inspired to set up a prayer tent and offer lunch one day a month and to locate it here.  She has been doing it every month since then.  She pays the $300-400 monthly cost out of pocket with the help of contributions from work friends and church members.  She says, “I don’t make that much money, and when I started I didn’t know how I was going to pay for this. But the money just came”.  The lunch is her individual effort – it is not sponsored by a church, though she worships at All Nations Worship Assembly in Baltimore.  Her mother, Janice Johnson, belongs to the First Baptist Church in Glendale, Maryland.  Her friend, Christina Brown, belongs to the National Church of God in Fort Washington, Maryland.

Johnson says, “When I get a better paying job, I can do more”.  About 60 people stop for lunch on a typical Saturday.  Johnson adds, “They don’t have to be homeless.  Anybody can stop by for food, prayer, or if they just want to talk.”

The Week Ahead… & American Legion Post 8 Fundraiser on Saturday

Development of questions to be addressed to DDOT Director Marootian at March 12, 2020 ANC 6A meeting.

Discussion of why DC agencies and councilmembers are refusing to talk with the Hilleast community.

ANC6B Executive Committee meets at 7:00pm in Hill Center to set the agenda for next month’s meeting of the ANC on March 10 in Hill Center..

The Eastern Market Community Advisory Committee will meet a 7:00pm in the North Hall of Eastern Market, located at the corner of 7th and North Carolina.

Report of the Market Manager.

Status of the signage

Status of the security measures

The Capitol Hill American Legion Auxiliary is rolling out the red carpet for two local veterans who recently went to Nashville.  Each came back with an original song they wrote with a professional songwriter and recorded as part of Operation Song.  This workshop program in Music City, U.S.A., has as its mission “to empower veterans, active duty military, and their families to tell their stories through the process of songwriting.”  The Operation Song organization has welcomed those who’ve served in war and peace, “bringing them back one song at a time,” as its motto says.  So far more than 750 songs have been created, helping veterans to express and transform often painful experiences.  Former U.S. Army officer Calvin Tildon’s song, “My Happy to be Alive Day,” tells his story of combat in Vietnam.  John Fay became a U.S. Marine right out of high school in the late 1950s, and called his song “Squared Me Away.”

Doors open at 6 p.m., with the formal program, including musical performances by “Veterans in Harmony”, starting at 7 p.m.  Gourmet nibbles and a specialty cocktail will be served.  The Capitol Hill community is invited to attend and enjoy a fun musical evening.  The suggested donation is $10 and 100% of proceeds going to benefit the DC VA Music Therapy Program.   Tickets at the door, or buy online here. http://bit.ly/2T7pm0C