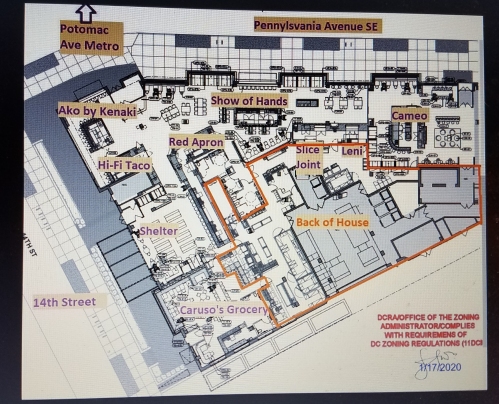 Here’s the layout for the Culinary Clubhouse for The Roost. click to enlarge

Last night, ANC6B endorsed the request for a liquor license for The Roost  – the eight food service plus two bars plus a full service restaurant venue coming to Blackbird, the newly developed 167 unit residential building at 1401 Pennsylvania Avenue, SE.  The “culinary clubhouse”, as it’s being touted, will seat 415 and have a 480 maximum occupancy.

According to Michael Babin of the Neighborhood Restaurant Group, Cameo – the coffee shop – will be the first to open in about two months, followed by Leni – the all-day café – a week later.   He anticipates a gradual opening of the rest of the food outlets and bars.  Whether there will be on site seating is an open question.  Initially, Babin expect preorder and pick up with social distance seating phased in.  The remaining outlets include, Ako (sushi and omakase – leave it to the chef) by Kenaki, the Slice Joint (pizza), Red Apron (charcuterie and burgers), Hi Fi Taco, Show of Hands (craft cocktail and wine bar), and the 50 tap beer concept and garden, Shelter. Caruso’s Grocery, a standalone red sauce Italian Restaurant will be the last to open, but carry out will be available some time earlier.

The 20 foot sidewalk outside of Shelter on 14th Street will accommodates a sidewalk café with retractable awning, with a capacity of 118, seated and standing.  Residential neighbors directly across the street had concerns with respect to noise and late hours, but seemed mollified after Babin agreed to close the café at 10:30pm on Sunday through Thursday, and 11:30pm, Friday and Saturday.

Babin hopes to promote the “clubhouse” as a daytime hangout for creative types by including an outlet for Shop Made In DC  – a “highly edited “storelet” featuring a small collection of locally produced “wares and goods from 40+ DC creatives”.  The Roost will provide a printer, Wi-Fi and space for makers to hold classes in the evening to teach people their crafts.