The Week Ahead…& Some Photos from the Past Week

Here’s a photo of the elegant arches of the Fredrick Douglas Bridge from the Navy Yard Riber Walk. Click to enlarge.

The last component of the sixth unfinished arch of the Fredrick Douglas Bridge was hoisted into place on Thursday. The “Christmas tree” atop the just-finished arch is in keeping with a construction tradition whereby a tree is attached to the top of a structure as part of a “topping-out” ceremony signifying that the highest element has been placed.

The on-ramp from 8th Street, SE, to I-695 had some unused greenspace. 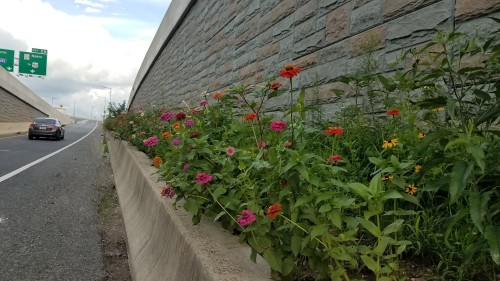 Guerilla Gardeners is transforming it into a pollinator habitat. For more photos and information, go here:  https://bit.ly/31TrkWG

The Week Ahead…& Some Photos from the Past Week

For those attending via WebEx: use this link:

To join by telephone:

Update from Andrew DeFrank – Community Engagement at DDOT – on outstanding traffic calming issues, and if a “comprehensive study” request is necessary for H Street NE (rather than a TSA).

Slow Streets program – feedback on signage and requests to expand

Consideration of additional pedestrian/traffic safety issues, as suggested by commissioners and community members.

For those joining via WebEx: use this link:

To join by telephone:

Discussion of request by DC Culinary Academy at 1357-1359 H Street N.E., for a modification to the establishment’s settlement agreement and ABRA license to add a Summer Garden endorsement.

Discussion of requests by Duffy’s Irish Pub at 1016 H Street NE for:

Agenda has not been distributed at press time.

For a WebEx link and other information on joining the meeting, go here: https://www.anc6b.org/calendar/

ANC 6A Economic Development and Zoning Committee is scheduled to hold a virtual meeting at 7:00pm via WebEx.

Agenda has not been distributed at press time.

Instructions for accessing the meeting via WebEx has been posted under Hot Topics at https://anc6a.org/

Call-in information will be announced via listserv announcement and posted 24 hours prior to the meeting on ANC6A’s Community Calendar: https://anc6a.org/community-calendar/