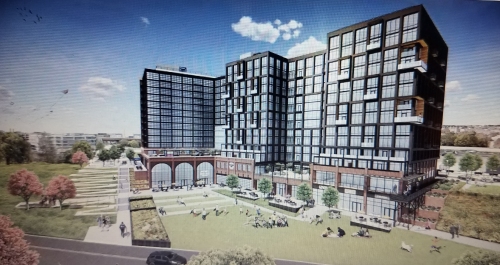 Last night, ANC6B left it up to the DC Zoning Commission whether to require Felice Development to provide more than the $25,000 of the $250,000 recommended by the ANC for professional services related to securing a Capitol Hill site for an Adult Day Center.

As a condition of the ANC’s support for the developer’s change the zoning for the 13 story mixed use  building on the Anacostia Waterfront at 1333 M Street, the developer and the ANC entered into a Memorandum of Understanding regarding terms mutually agreed upon, including benefits such as affordable housing, public space improvements, environmental requirements, transportation issues, and construction operations.  Last week, the ANC’s Planning and Zoning Committee agreed to include $250,000 for the ADC in the MOU.  Felicity Development said they would not sign the MOU with the $250,000 requirement included.

The developer had offered only $25,000 as a public benefit in the zoning change application filed with the DC Zoning Committee earlier this month.  Capitol Hill Village had been successful in persuading the P&Z Committee to recommend the higher figure to the full ANC.

At last night’s meeting, the ANC – seeking to avoid jeopardizing what could be agreed upon – removed the $250,000 contingency and approved the MOU, but stated that they could not support approval of the application to change the zoning currently before the Zoning Commission because the public benefits were insufficient without the funding for the ADC.

The following language was adopted as the position of the ANC on the issue, by a vote of 7 – 1 – 1.

“ANC 6B is opposed to approval of the case as we find the proffered public benefits insufficient. We note that increasing the contribution to support senior programming, specifically for the cost of professional services related to securing a site for an Adult Day Center to $250,000, combined with the previously proffered public benefits outlined in the applicant’s supplemental prehearing statement [and the MOU], would be sufficient in meeting the threshold in offering ‘a commendable number of quality or meaningful public benefits’.”

When the Zoning Commission meets to consider the zoning change application Thursday night, it will be a test of the “great weight” the agency is required to give ANC opinions.

Capitol Hill Corner reached out to Commissioner Kelly Waud, in whose single member district the project lies, for reaction.  Waud commended P&Z Committee Chair Holman for leading the benefit and amenities effort, adding, “The ANC and the subcommittee has negotiated as well as they could with a reluctant Felice Development. The ANCs efforts were hampered by lack of DC local area plan/vision for that corner of the city, and the limited information Felice provided about the population they are targeting with the development and the commercial efforts.  I personally remain skeptical about the size and scale of this development, and question how well it blends in with other developments in the area (heliport, 11th Street Bridge Park) and the recreational nature of the Water Street corridor.”

Commissioner and candidate At Large DC Council Chander Jayaraman said, “The ANC took a strong stance on behalf of seniors and the community by rejecting the developer’s refusal to support a critical need in our community – an Adult Day Center that would serve up to 50 seniors a day. I am proud of our commissioners who agreed to push for a more substantive public benefits package for a 900 unit development on the waterfront.”

Capitol Hill Village representative Larry Johnston said, “I’m grateful that the ANC PUD Subcommittee, the Planning & Zoning Committee, and the full ANC have given the Village an opportunity to propose something that will be good for seniors in Ward 6. The residents of Ward 6 lack access to adult day services, and I’m happy that we may continue to advocate for those services as we proceed through the PUD review process.”

The DC Zoning Commission will hold a Virtual Public Hearing on Thursday at 4:00pm, on 1st Phase Consolidated  PUD for 1333 M Street.  Interested parties can join the meeting by WebEx or Telephone – Instructions will be provided on the Office of Zoning website by Noon of the Hearing Date:  See here:  https://dcoz.dc.gov/