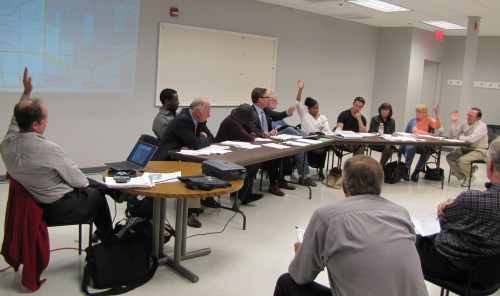 Monday night, a closely divided Ward Six Task Force on Redistricting voted 5 – 4 with 1 abstention to move 1275 ANC6B residents into ANC6C.  The vote moved the 6C boundary from East Capitol – a boundary existing for some 35 years, according to Task Force member Ken Jarboe – to Independence Avenue, encompassing the blocks from 3rd Street to 7th Street.  Prior to the vote, the Task Force exempted the nonresidential areas – the southeast quadrant of the Capitol Grounds, the Library of Congress’ Jefferson and Madison Buildings, and the Folger Library – from the move.

Raphael Marshall abstained.  Had he voted against the motion it would have failed on a tie vote.  Asked about the vote afterward, Marshall said, “I didn’t feel comfortable voting on that issue.”

The motion was strongly opposed by Task Force members Donna Scheeder and Ken Jarboe.  Scheeder said the Task Force was proceeding on the basis of a faulty presumption that ANCs should be equal in size – an assumption not in keeping with the Capital Charter.  “It’s tearing a neighborhood apart, when the most important thing is keeping a neighborhood together,” she said before casting her vote.  Jarboe agreed, saying the Task Force recommendation to transfer the blocks to ANC6C was not creating neighborhood cohesiveness, but destroying it.  In addition, Jarboe said, reorienting a neighborhood which looks south and taking away their vote on neighborhood liquor licenses on 7th Street was a “grievous violation of Task Force guidelines.”

It seems procedurally possible for the Task Force to reverse the vote on moving the residents.  In reality, it is likely that such a change could only be brought about by Councilmember Tommy Wells, who will have the final say on the boundaries before they go to the City Council for enactment.

Following the meeting, ANC6B Vice Chair Ivan Frishberg said, “This decision by the Task Force strips the residents who look at Eastern Market and are just a few hundred feet from the Hine School site from ANC representation on those issues and instead puts them in an ANC that is focused on the issues around Union Station and NoMa.  The task force replaced a plan they adopted unanimously with a highly controversial plan that was adopted on a very split vote.  This is bad process and bad policy.”

In other business, the Task Force also denied ANC6A’s recommendation that it be allowed to retain all of Lincoln Park, which the Task Force had recommended splitting between ANC6A and ANC6B in its map released at the end of August.  As a result, ANC 6B will now preside over governance of half of Lincoln Park, a move that received support from 6B Commissioner Brian Pate.

In all, the Task Force was able to consider only half the items on its agenda Monday night, agreeing to postpone consideration of recommendations for single member districts until Thursday night.  This meeting will include consideration of the proposal to split Eastern Market Metro Plaza among four different ANC Commissioners.

The schedule for the work of the Task Force is as follows: