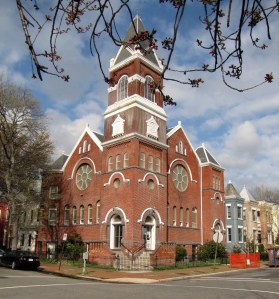 Epworth Church at 700 A Street SE

ANC6C Asks DCRA To Revoke Certificate of Occupancy Until Compliance

On September 20, the Historic Preservation Office issued a Correction Order to the World Mission Society, Inc. (Church of God) – current owners of Epworth Church at 700 A Street, NE – which instructs the church to obtain permits for re-installation of stained glass windows which were removed in January of 2012, or to appeal the Correction Order in the DC Court of Appeals.  According to HPO, if the permits are not obtained by the October 18 deadline and an appeal has not been filed, HPO will issue a Notice of Infraction, which includes a fine. If the Notice of Infraction is ignored, additional fines can be levied and a lien on the property undertaken.

Coincidentally, the new order came four days after ANC6C sent a letter to Gretchen Pfachler, Chair of HPRB, noting that the Board’s three-month-old order to the Church to restore the windows had not been followed and requesting that HPRB enforce the order.

Last week, at the urging of Bobbi Krengel, Chair of the Capitol Hill Coalition for Sensible Development, ANC6C Zoning and Planning Committee recommended the full ANC6C send a letter to DCRA asking that the agency revoke the Certificate of Occupancy until they are in compliance.  Last night at the ANC6C October meeting, Zoning and Planning Committee Chair Mark Eckenweiler informed the Commission of the HPRB order.  The ANC then voted unanimously 5-0 to send a letter to DCRA requesting that the building’s certificate of occupancy be revoked until all Historic Preservation law violations are cured.  Commissioner Daniele Schiffman was not present for the vote, having given birth a few days ago.

Last June 13, the DC government ruled that the character-defining stained glass windows at the 1895 Epworth Church must be preserved.  Portions of the windows which were removed were placed in storage waiting the ultimate outcome of the efforts by owners to permanently remove them.   See CHC posting here:  https://capitolhillcorner.org/2013/06/19/2810/

At the time, Krengel, said, “We are fully expecting the owners to appeal this decision to the Court of Appeals, and do not know if there would be any role for the neighborhood to play there, but stand ready to participate in any way that may be required to protect our neighborhood.”   However, members of the ANC Planning and Zoning Committee have not been informed that an appeal has been filed, nor have they been able to ascertain that an appeal has been filed after an examination of the DC Court of Appeals docket.