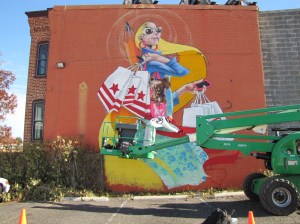 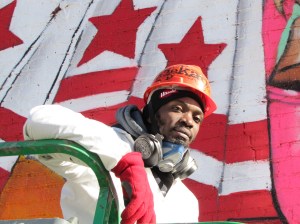 A new mural promoting local shopping went up today on the side of the building overlooking the commercial parking lot at 8th and Virginia Avenue, SE.  It is highly visible for commuters waiting at the stoplight at 8th Street after taking the 6th Street exit from the SW Freeway.

The mural is part of American Express’ “Shop Small” effort  to draw attention to and encourage shopping at local brick and mortar businesses.  This year, the organization is using muralists in the ongoing annual national endeavor to focus on “Small Business Saturday” – November 30.

The theme of this aerosol-and-house paint mural features a happy modern young woman just returning from shopping with cellphone in hand.   It incorporates shopping bags emblazoned with the stars from the DC City Flag, a pup recalling the nearby dog day care center.  The sharpened pencil – about which more below – is a recurring image in the artist’s recent work.

The artist, Aniekan Udofia, selected by “Shop Small” to create the 8th Street mural, is known for other work in DC, notably the mural for Ben’s Chili Bowl and the gagged George Washington both on U Street, as well as towering murals of Duke Ellington and Fredrick Douglas.  He was born in DC and lived in Nigeria for 16 years before returning to DC where he has lived for the past 13 years.  http://www.aniekanudofia.com/

Udofia says he is inspired by the late 19th and early 20th Century Czech painter and illustrator Alphonse Mucha, a founder of the Art Nouveau movement known for his distinctive style, which Udofia says he tries to apply to a more modern setting.

Asked about the use of the pencil in his murals, the artist said it is part of his “Reloaded” series.  Udofia says it recalls childhood, when “drawing was fun.”  Now, he says, “adults turn to social media and kids are into Facebook – ‘Reloaded’ represents the idea of the pencil as the base of design.  The pencil represents the base – the root – the beginning – of any creative plan.”