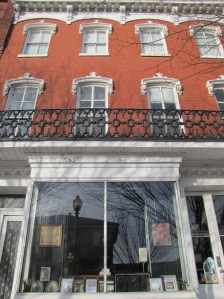 Cafe Old Town’s Sign is not up yet, but the former Capitol City Sub Shop is open for business

The popular Alexandria carryout Café Old Town has opened a second location on the end of Barracks Row in the space formerly occupied by Capitol City Subs at 751 8th Street, SE.  Owner Cristina Kwon leased the building last summer and remodeled it.  The Barracks Row location is primarily carry out, but does have limited seating for inside dining.

What makes this place special are the Korean Specialties – particularly the imaginative kimchi tacos (with gluten free corn tortillas), kimchi burritos, and kimchi quesadillas – all with the customer’s choice of marinated rib eye steak (bulgogi), spicy pork, or grilled chicken.  For the uninitiated, kimchi is a traditional spicy fermented Korean side dish made of vegetables with a variety of seasonings.

Kimchi has acquired its reputation as a health food because it is low in calories and contains a high concentration of dietary fiber.  One serving is said to provide over 50% of the daily recommended amount of vitamin C and carotene.  In February, 2008, Health Magazine named kimchi as one of the “World’s Healthiest Foods” for being rich in vitamins, aiding digestion, and even possibly reducing cancer growth.  Kimchi is rich in vitamin A, thiamine (B1), riboflavin (B2), calcium, and iron, and contains a number of lactic acid bacteria, among those the “healthy” species Lactobacillus found in yogurt.

Sandwiches such as the California Club, the Turkey Avocado Wrap, the BBQ Sub with slaw and the Reuben with corned beef and/or pastrami have been popular choices at Café Old Town Alexandria, according to owner and chef Kwon.  The traditional breakfast menu features a Tomato and Fresh Lime Burrito.

Comments Off on Kimchi Carry Out Debuts on Barracks Row