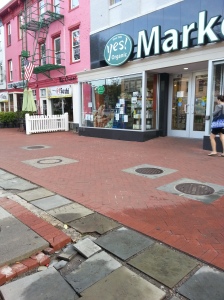 Last night at ANC6B’s Transportation Committee, commissioners from ANC6B and representatives from Barracks Row MainStreet and Capitol Riverfront BID submitted non-automotive transportation projects they hope to have funded by the $1.4 million available under the Neighborhood Performance Parking Fund.  The committee will decide which projects should be prioritized and forwarded to the full ANC for approval at the March meeting next Tuesday; after that the projects are submitted to DDOT for review.

Michael Stevens, Executive Director of Capitol Riverfront BID, had a long list of projects – all for the Ballpark District – with an estimated cost for some of them:

The Neighborhood Performance Parking Fund comes from a portion of the increased parking fees in the three areas of the city where the Performance Parking Program has been implemented:  Ballpark Area (including Barracks Row and Eastern Market), Columbia Heights, and H Street, NE.  Within these areas, the following entities are eligible to apply for funding for projects: ANCs, Business Improvement Districts (BIDs), and Main Street organizations.

Since applications are due to DDOT by March 21, next Tuesday will be the last opportunity for ANC6B to weigh in on them.  Residents who feel strongly about any of these projects should contact the ANC6 B commissioners here http://www.anc6b.org/ (click on “About the ANC’)