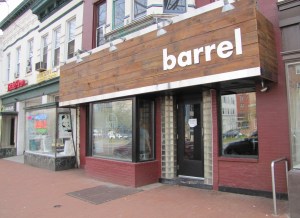 Barrel is at 613 Pennsylvania Avenue, SE 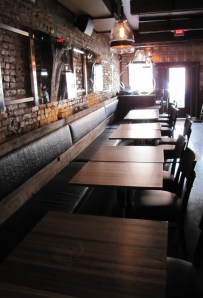 Part of the Dining Room Looking toward the Front of Barrel

Matt Weiss, co-owner of Barrel is playing it cagey with respect to exactly when Barrel will open, but he said, “you can print we expect to open next week.”  Pressed, he allowed that if all goes well at a soft opening for family and friends Thursday night, it might open tomorrow, Friday.  Weiss prefers to announce the opening on Twitter and social media, rather than in the blogosphere.

The bar and restaurant will feature more than 100 whiskies and a menu of South Carolina country cooking, heavy on the pork and fried chicken, light on vegetables.  No salads or desserts will be offered.  In addition to aged bourbon whiskies, Barrel will serve a creative line of cocktails, wine, and craft beers.

Weiss is proud of the main dining area’s 25 seat 60 foot concrete bar.  A “BAR” sign and arrow made of  lights at the rear of the restaurant points the way to the low-ceilinged underground “Elixir Bar” and “The Dispensary” – the latter being the liquor storage area behind locked sliding glass doors.  The lower room has a short bar and tables and is suitable for private events.

Formerly the 18th Amendment, the bar, owned by Mike Menard and Mike Schuster (partners in Star and Shamrock, Trusty’s and the future Compass Rose coming to 14th Street) brought in  Weiss as a new partner to open Barrel.  Menard and Schuster are also partners in The Pour House at 319 Pennsylvania Avenue, slated to close after an 11 year run, on April 30.  Weiss, also owns Union Pub and 201 Bar.

Barrel, at 613 Pennsylvania Avenue, SE, will open at 4:00pm daily for dinner.  For the bar and kitchen menus, go here: http://barreldc.com/