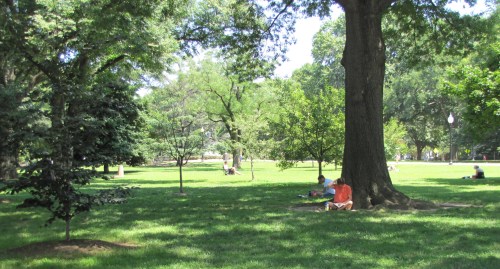 Historic Preservation application for 317 7th Street SE, two-story rear addition (This is the former Sheehy House for which the developers (317 7th Street Associates) apparently anticipate finding a restaurant-tenant.     Editor’s note:  The original posting reflects an error occasioned by a misreading of the ANC6B agenda.  Commissioner Ivan Frishberg has corrected the record as follows:

“The case has been pushed by HPRB until September and I think the most recent agenda reflects this.  It was never going to be considered for the consent agenda…Naturally there would be a high degree of outrage if this case went forward on consent after the action we took in committee, so an error like this has some consequences.  This case is under regular order at item #7 with the rest of the PNZ agenda and it even notes the HPRB decision to postpone until September.  The published agenda notes we will spend some time on this.”

Zoning variance request for 1301 Pennsylvania Avenue, SE, allow renovation and expansion of existing office/retail building.  (This the Douglas Development project in which Ari Gejedenson hopes to open a specialty food shop and restaurant).

(Consideration of &Pizza request for zoning relief and special exception to fast food ban has been deferred until the September meeting.)

538 3rd Street, NE, zoning variance to allow conversion of a grocery store into a four-unit apartment.

CSX Tunnel – ANC6B has scheduled a special call meeting at 7:00 PM at the National Community Church, 535 8th Street, SE, to consider comments on the Federal Highway Administration’s and the District Department of Transportation’s Final Environmental Impact Statement for the proposed reconstruction of the Virginia Avenue Tunnel.

The Federal Highway Administration and the District Department of Transportation’s Final Environmental Impact Statement for the proposed reconstruction of the Virginia Avenue Tunnel  incorporates feedback from the community and identifies “Alternative 3 – Two New Tunnels” as the Preferred Alternative for construction. The FEIS and a fact sheet are available at www.virginiaavenuetunnel.com

Request by Smith Commons at 1245 H Street NE for a summer garden endorsement.

Request for a Restaurant License for The Pursuit at 1421 H Street, NE.