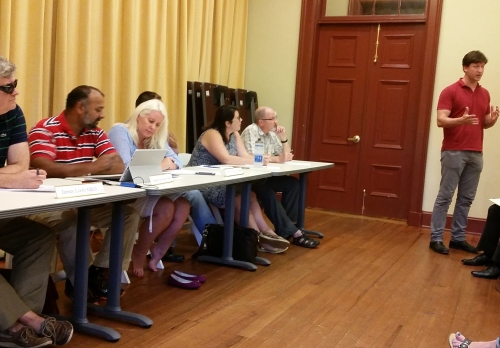 Last Thursday night at ANC6B’s Alcohol Beverage Control Committee meeting, prominent DC restaurateur Michael Babin said he believed he could reach an agreement to install the odor pollution control unit on his new proposed restaurant at 415 8th Street (formerly Kraze Burgers) that a broad coalition of Capitol Hill residents had requested of him.  Babin had resisted taking that step, earlier telling residents that he could not afford the $50,000 price tag of the installation.  He had previously​acceded to two other requests – indoor trash storage and noise abatement.  In his concession, he told the ANC and the 25 or so residents at Thursday night’s meeting, “We want to be great neighbors.”

Babin said he had communicated the details of the neighbors’ concerns to his landlord, StreetSense, and praised the landlord as a “good operator who cares” about the concerns of neighbors.  He did not comment on whether StreetSense was participating in alleviating the expense of the installation.  Babin heads the Neighborhood Restaurant Group, which owns 17 restaurants in DC and Northern Virginia.  See CHC post here:  http://bit.ly/1JRWIWN

The large contingent of concerned residents who attended the meeting urged the ANC to protest Babin’s application for a liquor license without an odor mitigation agreement for the new venture, but Babin’s announcement made the protest unnecessary.  Resident Katherine Szafran spoke for the group and presented the ANC with a petition with 190 signatures of residents and non-food business owners, including civil rights and congressional​legend​ ​Representative John Lewis.  The petition urged Babin and StreetSense to adopt “Best Practices” including installing a pollution control unit, indoor trash storage, and sound mitigation.

Szafran told the ANC that the lax standards for restaurant operating procedures “are a major health issue.  Rats are overrunning the neighborhood.”  She cited the long efforts of residents to address the problems and pointed to recent closures of two restaurants neighboring Babin’s new location which the city had shut down because of vermin.  “Rats smell food and they travel – part of the solution is to cut down on the smell of fried food and grease,” she said.

Although neighbors concerned about the impact of restaurants on Barracks Row have presented petitions before, none has had as many signatures nor reflected such a broad community involvement.  Those signing included residents on the streets around Barracks Row and Eastern Market,​ those near the restaurants between 2nd and 3rd Streets on Pennsylvania Avenue, SE, as well as residents from disparate locations across Capitol Hill.

​The enormous efforts undertaken to secure this many signatures and the level of concern exhibited signal residents’  lack of confidence that ANC6B will prioritize their ​interests over the interests of Barracks Row restaurants.  Residents had cause to worry.  A settlement agreement reached in May with Aaron Silverman on his new companion restaurant to Rose’s Luxury – “Elaine’s” – on Barracks Row, seemed to give the restaurant the benefit of the doubt on the issues of trash, noise, and odors – none of which were required to meet the “Best Practices” standard.  Neighbors felt left out of the process when the settlement agreement was worked out with Silverman by ANC Commissioner James Loots.  See here:  http://bit.ly/1EcMLfJ

The previous ANC6B – some members of which did not seek re-election – clearly felt that the “Best Practices” agreement reached with & Pizza (including all three concerns regarding Babin’s new place) would become the new standard for Barracks Row.  It is unclear if a majority of the current ANC6B feels the same degree of commitment, but it is clear that they are being held to a new standard themselves regarding Barracks Row issues.

To his credit, Babin is undertaking the expensive mitigations even though, as he told the attendees, he is “pretty sure” he could get a liquor license without agreeing to the requests.

With two significant victories on imposing “Best Practices” on new restaurants opening on Barracks Row – first & Pizza and now Babin’s new place – ​the community has moved closer to establishing those standards as the new norm for new restaurants​, ​not only on Barracks Row but on Pennsylvania Avenue, and potentially H Street, NE, which ​struggles with​ the impact of food and drinking establishments on its community​ and does so without the benefit of a BID, or Business Improvement District, to mitigate ongoing problems.​​

In the end, the Committee voted 9 – 0 to approve Babin’s liquor license application contingent on a signed settlement agreement incorporating language covering indoor trash storage, noise mitigation and pollution control units.  The agreement must be reached and signed before the meeting of the full ANC6B meeting next Tuesday.  Timing is critical, since the ANC will not meet again until September 8, and as Babin said Thursday night, “time is money.”

The yet unnamed restaurant will seat about 50 patrons and will be modeled on another Babin restaurant in Virginia, B-side, as first reported by CHC here: http://bit.ly/1JRWIWN