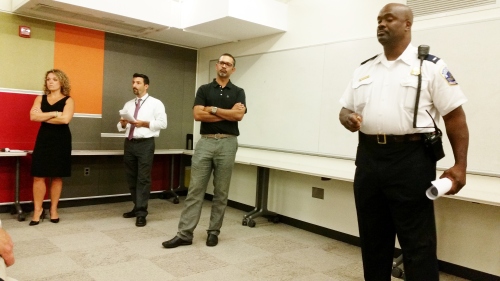 80 or so residents of near Northeast came to a community crime meeting in NE Library Tuesday night to voice their frustration and concern regarding the increase in violent crime – particularly the 6 to 8 gunshots that were fired a week ago Sunday afternoon at 8th and Maryland, NE, by an unknown gunman (or gunmen).  First District MPD Lt. Eddie Fowler recounted the incident, noting there had been no injuries though “car windows were shot out.”  He said police conducted a door to door canvas to make sure no one was injured.

According to the DC MPD crime map, the incident appears to have been classified as a property crime rather than a violent crime, perhaps because no one was injured or directly threatened.   Despite the classification, this incident – more than the increase in the violent crime “robberies with gun” to 10 compared with the 2 in the previous 30 day period – drove the meeting’s agenda.

Much of the frustration felt by the attendees stemmed from MPD officials and officers being unwilling or unable to discuss the details of the incident because it “is still under investigation by MPD detectives” which is all too often the response from police to the questions of concerned residents.  Questioned as to the status of the investigation, Fowler offered few details, replying that he could only say that there had been no arrests.

CM Charles Allen arrived an hour into the meeting, coming from another public safety meeting in Ward Six’s PSA 108.  He said the increase in crime had left him angry and frustrated and said he was on the phone “every single day” with commanders of the three MPD police districts that cover Ward Six.  Among the most serious issues in Ward Six, he listed “crews” trading gunfire in Shaw and Rosedale, violent robberies in Hill East, and a homicide in Southwest.

Regarding the Sunday shooting in question, he said he could speak more freely than the police because his information came from conversations with city officials.  He offered additional information regarding the Sunday shooting: “We don’t know why and we don’t have a suspect.  An individual was detained, but he did not have a gun.  MPD is looking at video from 7-11 and private residences. “

Allen said he’s had “dozens and dozens” of emails from concerned residents about the increase of crime but that conversations with the Mayor and Chief of Police has not pointed to a single cause.  Some contributing factors, he suggested, could be synthetic drugs, an increase in numbers of firearms on the street and an increase in firepower capacity of those firearms.  Seth Shapiro from the Mayor’s office added that “we are seeing a lot of repeat offenders, and the Mayor is tracking that.”

Allen has asked Chief Lanier to increase the number of officers in the neighborhood during the daytime and said that she planned to do so.  He also said that although that Chief Lanier has done many things right he disagrees with her late May decision to disband the vice squads and turn investigations over to a centralized narcotics unit:  ”I think it’s still valuable to use the vice units.  I don’t believe it’s a good idea to dismantle them.”  The DC Police Union has recently called for the immediate reinstatement of district level vice units.

Allen said that resident’s voices are important and urged residents to hold the city accountable – “hold our feet to the fire” – and to hold MPD accountable.  He urged residents to attend PSA meetings and work through them to improve community policing.  Capitol Hill Corner has urged the development of a stronger relationship between the ANCs and the PSAs to encourage community attendance, provide a broader picture of crime close by but not within the PSA, and to develop a better working relationship between the ANCs and MPD officials.  None of the ANC commissioners from either ANC6a or ANC6c appeared to be present at the meeting, or if they were, did not identify themselves as such during the Q&A portion of the meeting.

CM Silverman, who was also in attendance, urged residents to make their voices heard by the city council, the mayor, and the PSAs to ask for more money and resources for the MPD.

Comments Off on Near Northeast Crime Meeting on MD Ave Shooting: Frustration but Few Answers