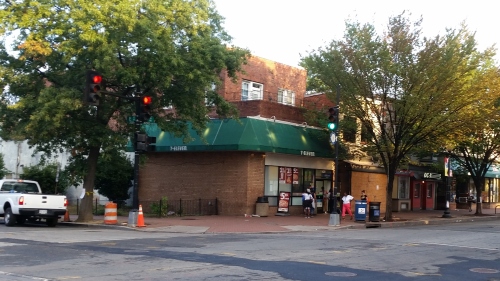 The 7-11 in the 400 block of on Barracks Row was the scene of a flash robbery last Thursday.

According to an eye witness, last Thursday, September 3, at about 3:30pm, 10 to 15 youths in their teens wearing khaki pants and white shirts converged on and entered the Barrack Row 7-11 en masse.  Some wore insignia – tags – on their shirts depicting an “E” with a wreath around it, possibly indicating an affiliation with Eastern High School.  The group was jovial and laughing and began filling their bags and pockets with candy bars and bags of chips.  While clerks and others in the store stood stunned by the shameless behavior, and perhaps cautious because of the number of youths, the group strode casually out, chatting and laughing, “with impunity,” as an observer put it.

A clerk behind the counter called 9ll, but response was slow, and the eye witness furnishing this account left the store before police arrived.

Reportedly, the attitude of the 7-11 employees was a shrugged shoulders resignation.  “It happens,” one employee was reported to have said, his attitude saying the unstated:  it’s the cost of doing business here.

The term “flash rob” or “flash mob robberies”, a reference to the way flash mobs assemble, has been used to describe a number of robberies and assaults perpetrated suddenly by groups of teenage youth.  Bill Wasik, originator of the first flash mobs, and a number of other commentators have questioned or objected to the usage of “flash mob” to describe criminal acts, however, in a number of reported cases, flash mobs have turned violent or led to criminal activity.