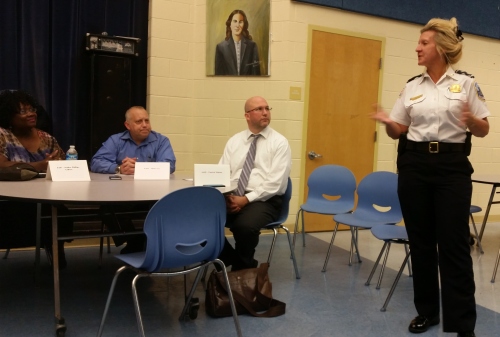 Assistant Chief Diane Grooms came to ANC6A Tuesday night in response to an ANC request that MPD address what the MPD is doing about the rash of violent crime on or near the popular but gritty H Street, NE, nightlife destination.  Grooms was a high-level stand in for First District Commander Jeff Brown who is on leave owing to a death in the family.

Grooms sought to assure the ANC and the 50 or so residents in attendance that Chief Lanier is devoting considerable resources to address crime city-wide as well as in and near PSA 104 which includes H Street, NE.  Multiple MPD resources are involved in the effort, including the Gun Recovery Unit, the Narcotics and Special Investigations Division (NSID), and the Criminal Interdiction Unit (CIU).  She said that MPD also devotes additional resources to nightlife areas – up to ten officers on an as needed basis.  Some of the nightlife areas she mentioned include Adams/Morgan, China Town – and H Street, NE.  In addition, she said, the Chief has authorized overtime in every one of the eight MPD Districts.

Much of the crime in the H Street area, Grooms said, is from teenage and pre-teenage youths who come from Trinidad and congregate at locations such as the Sherwood Recreation Center and along Benning Road, including the Starburst Plaza which she termed “the ground zero for distribution of synthetic drugs.” Grooms said that a typical robbery involves a group of 2 to five who knock the victim down and steal property and then take what she termed the main route out of the area – Benning Road.  MPD devotes a lot of resource3s to this corridor, she said.

With respect to recent homicides on or near H Street, she noted the recent killing of an alleged potential robber by his would be victims (case closed), a fatal 800 block of H street stabbing on a Metrobus in which an arrest has been made, and a Third Street, NE, homicide which she described as a revenge killing (still pending).

Grooms referenced the criticism levied against Chief Lanier for disbanding the vice squads and consolidating them in the NSID, saying that the centralization had resulted in “tons of arrests” involving distribution after refocusing the unit’s efforts away from lower level drug users and possessors of marijuana, heroin, and crack cocaine: “the system is flooded with people who need help rather than locking up.”.  CM Charles Allen and the MPD Union have both criticized Lanier for centralizing the seven individual vice units into one citywide drug unit.

Detective Sergeant Andrew Struhar of NSID followed Grooms, pointing out some of the drug sale hotspots on or near H Street, naming Starburst Plaza, “Rose’s Liquor,” the CVS in Hechinger Mall, Rhode Island Avenue and Benning Road.  He noted 44 arrests recently for distribution of drugs along Benning Road and cited a number of heroin arrests in the 12th and 13th block of H Street.

Struhar said that the best thing the community can do to help MPD is to provide information, urging residents who observe drug sales to email MPD here:  NSID.drugcomplaints@dc.gov  Regarding when to email, he said, “Juvenile in parks smoking marijuana?  No.  Call 911.  Sale of drugs from houses or on the streets – email MPD.”

For the First District’s part, Acting Captain Tony Charland – who spoke in Brown’s absence – addressed the resources under the First District’s Command, citing the H Street detail now operating on a ten hour shift as well as the two members of the Mountain Bike Unit which currently patrol a ten block area centered on 8th and H Streets, NE, and the neighborhood to the south.

Charland said that the MPD has the presence and a plan to address crime – and emphasized that the key thing is communications and that “has to involve the community.”  He said that the number of calls MPD receives establishes the priority regarding devotion of resources to an area: “It’s not necessary to have police on every corner – communications allows MPD to find ways to be creative regarding community policing.  If you see something that doesn’t look right for your community, we need to know.”  He urged residents to emails him directly at Antonia.Charland@dc.gov

In the short time remaining for questions after the presentations, ANC6A Commissioner Omar Mahmud        told Grooms that residents feel a general sense of lawlessness and that people don’t feel safe because of the number of quality of life crimes such as gambling and public urination.  He said people are uneasy with the neighborhood and there is the sense that it is regressing.  He told Grooms that MPD needs to address the low level crimes that make them feel that way.

Grooms agreed that gambling needed to be addressed, but cited the difficulty of enforcing nuisance crimes such as public urination which has to be witnessed by an officer.  Grooms also noted that the department is undergoing a large number of retirements – especially at the managerial level – and that those vacancies are not expected to be replaced until a new promotion policy is in place sometime next spring.

Summing up, Groom urged residents not to hesitate to call 911 whenever they sense something amiss; “That’s what we’re here for.  If it doesn’t seem right, act on it.”  She said that the criminal population is small and involves a small number of people repeating crimes and that the police are trying to focus on that.