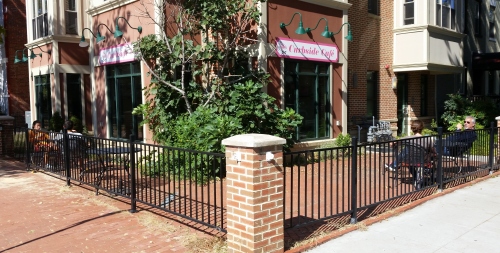 Closing at the end of October

Curbside Café will close the doors of its brick and mortar operation at 257 15th Street at the end of October and The Pretzel Bakery just down the street at 430 15th Street, SE, will relocate to the space.  The move will allow the bakery to offer sit down dining, but it is unclear whether the move will affect the bakery’s menu.  Curbside Café which opened in October of 2013 has over time reduced its operating hours to Friday, Saturday and Sunday.  A representative told CHC that business on the weekends is ok, but that the area lacks sufficient foot traffic to justify remaining open during the week.  The Payne Elementary School directly across the street occupies a city block which might otherwise hold residences with potential customers.

The bakery – owned by Sean Haney – will be the third attempt at establishing an eatery at the former site of the notorious New Dragon carry-out, long a 15th Street trouble spot.  (Curbside was preceded by The Creperie which briefly thrilled the neighborhood before falling victim to internal management squabbles.)

Re-establishing retail on 15th Street has been problematic.  The commercial strip – a hold-over from another era – once boasted a Safeway, a tavern, a small department store, at least two convenience stores, laundromats, two liquor stores and various other enterprises.  Little retail space remains as multi-unit residential projects soaked up the strip’s commercial space.

Presentations by Forest Hayes, Associate Director, Department of General Services, on the status of the Eastern Market Weekend Flea Markets

One response to “The Week Ahead….And Hill East’s Curbside Café Out – Pretzel Bakery In”