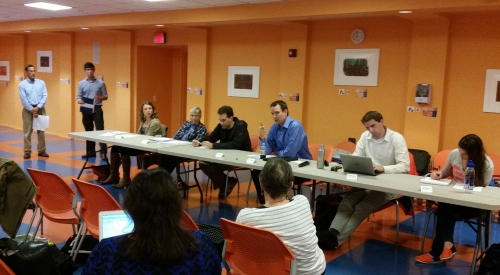 Representatives of the DC Fiscal Policy Institute (DFPI) told ANC6B’s Hill East Task Force a new stadium at RFK would come at the expense of the city’s schools, transportation, affordable housing and health care.   The group is a private advocacy organization that conducts research and public education on budget and tax issues in the District of Columbia, with a particular emphasis on issues that affect low and moderate income residents.  Executive Director Ed Lazere and Policy Analyst Wes Rivers responded to an invitation to address Hill East residents.

Rivers told the Task Force that the oft-touted associated economic benefits supposedly accruing from building a stadium in the city are not borne out by “study after study” which shows that there is “zero impact on jobs and income for the cities that invest in stadiums.”

Lazere stressed the opportunity costs which come with any city subsidization of a new stadium, saying, “If the goal is economic development, don’t spend money on a stadium.  Every dollar put into a stadium is a dollar that could go somewhere else. “

So, why do cities build stadiums?

Rivers said that stadiums are built because people buy into the argument that stadiums create economic development, because politicians like to “snag” sports teams and have big buildings to point to as a tangible accomplishment, and because team owners are adept at playing off one locale against another (if not for the actual siting, then for cutting a deal most favorable to the owner).

During Q&A, former ANC Commissioner Francis Campbell wondered whether a renewed lease could somehow be used to leverage development of Reservation 13 (here after referred to as Hill East Waterfront).  Lazere replied that big stadium deals are with big corporations in the business of making money, and it is hard to negotiate much.  Lazere then turned to NPS official Peter May who was in the audience and asked if he would like to comment.

May, who said that he was there to hear the presentation rather than answer questions, none the less explained the NPS lease of the RFK site, saying that Congress directed the Secretary of the Interior to enter into a 50 year lease with DC for the site in 1988.  May, as Associate Regional Director for Lands, Planning and Design for the National Capital Region, is responsible for administering the lease.  The lease allows use of the land for a stadium, parking, recreation, and related uses.  He said any change in the use of the land would require an Environmental Impact Statement.  “The real rub,” he said, “is that the lease only runs until 2038 – not long enough to allow financing, either by the city or a private entity.**  Proceeding with a plan for a new stadium is not practical without renewal of the lease…that would require an act of Congress.”

May noted that when the Mayor requested the Secretary of the Interior to support legislation extending the lease, his boss – Robert A. Vogel, regional director of the Park Service – told Bowser on behalf of the Secretary that “NPS will not take a position in support of such an extension at this time.”  It has been widely reported that the Park Service – which also oversees treaty relationships with the nation’s Native American tribes – will not consider a lease renewal while the Washington football team bears its current name.

That knowledge prompted ANC6B Commissioner Brian Flahaven to express his concern that team owner Dan Snyder would concede to a name change which would clear the way for the lease being renewed.  (The Washington Post has reported that renewing the lease is unlikely to be an administration priority in the remaining months of the Obama administration.)

The DFPI team told the Hill East residents that if a stadium becomes inevitable, the community should organize to insist on a community benefits package (similar to what developers provide to communities in exchange for zoning changes) and this involvement should begin and be maintained throughout the process before a deal is on the table when it’s harder to bring up opportunity costs.  The city has not been aggressive in wringing concessions from team owners, leaving it to residents to bring community pressure for benefits.  Rivers said that the past two stadium deals have not resulted in any economic benefit package for the community.

Snyder is anxious to move out of the problematic FedEx Field when his lease expires in 2026, and both Maryland and Virginia are trying to woo Snyder for siting the team in those states.

**Ed. Note.  Presumably, financiers would want to see guaranteed occupancy in a new stadium for the length of time sufficient to repay the loan.  As was apparent in the recent case of the proposed development of the Boys and Girls Club in Hill East, the 25 year lease the Department of General Services offered to developers effectively precluded private financing and pre-determined that the project would have to depend on LIHTC – Low Income Housing Tax Credit financing.