Violent crime in Hill East’s PSA 108 was up during the past 30 days over the preceding 30 days as illustrated in the two crime maps below.  There were 18 incidents of violent crime most recently, compared to 11 during the earlier period.  Most of the increase came in the category of robbery with gun.

Likewise, MPD’s District One saw an increase in violent crime to 98 from 76, though there was a significant drop in property crime.  See the MPD District One crime maps below.

PSA 108 meets at 7:00pm on Thursday night, at Liberty Baptist Church, 527 Kentucky Avenue, SE.  It will be the first PSA presided over by new PSA leader Acting Captain Damion Taylor.  He is expected to be accompanied by other criminal justice officials.  Taylor has been active in engaging the Hill East community on newhilleast listserv as part of a new emphasis on community policing.  Some believe that social media have made PSA meetings obsolete but it seems clear that a forum for personal engagement between police and residents is the necessary foundation both for effective community policing and effective community building.

According to the article, homicides are up 58% over the same period last year though police say overall crime is down some 5% so far this year and robberies are up in certain neighborhoods.

One of those neighborhoods is Capitol Hill, and the WaPo article notes:  “In Ward 6, which encompasses most of Capitol Hill and as of last month had experienced a more than 50 percent increase in gun holdups, the poll found the biggest drop in feelings of personal safety. The share of residents feeling at least “somewhat safe” dropped from 84 to 63 percent since 2011.”

One resident interviewed for the article cited gentrification as a cause of the crime spike – another blamed a failing criminal justice system.  The article states that “Many D.C. residents see the city’s rising homicide rate as part of a larger societal phenomenon and tied in part to rising economic pressures on the city’s poorest residents.” 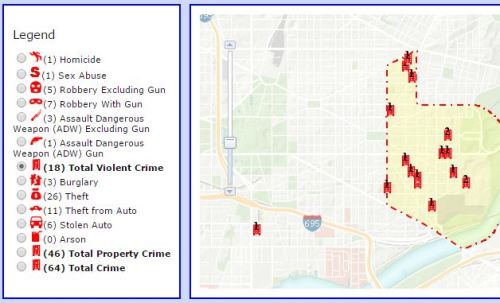 Violent Crime in MPD District One, Past 30 Days