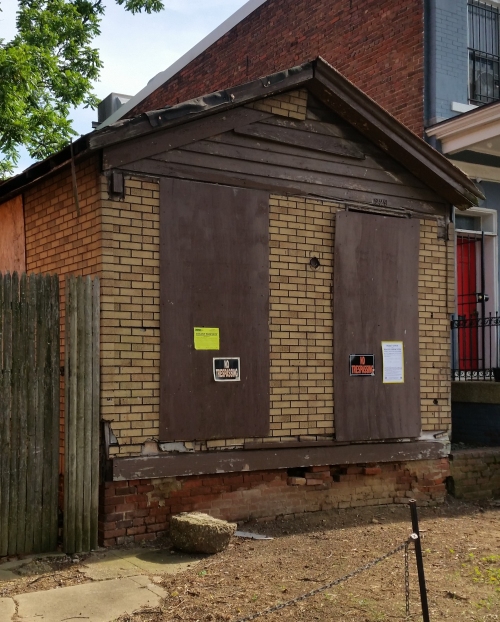 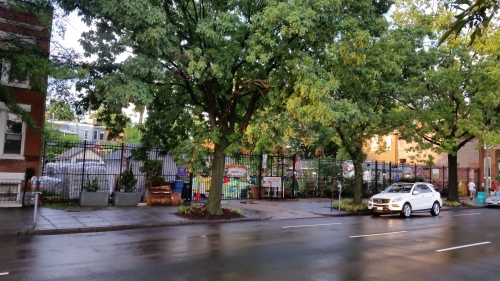 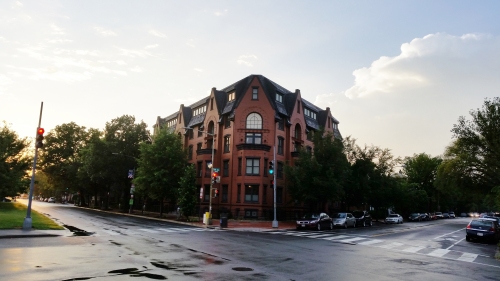 Sassan Gharai, founder of SGA Architects, is the new owner (ed. see comments below) of both the famous Shotgun House* and the attached Frager’s Garden Center in the 1200 block of Pennsylvania Avenue, SE.  The firm designed and developed Butterfield House at 1020 Pennsylvania diagonally across from the old Frager’s Hardware store, which is being developed by Perseus Realty.  The new SGA project is within the Capitol Hill Historic District and subject to design approval by the Historic Preservation Review Board.

SGA plans to build a 50 foot, 120 unit apartment building by right, on the site that is now Frager’s Garden Center.  The Shotgun House will be pushed back on the lot, preserved and restored, and a three story addition will be built on the rear of the building. Sources indicated the building would not contain a retail component (ed. but see comments below).  The town house at 1230 Pennsylvania which is part of the parcel would remain a residence and be incorporated into the project.   SGA architects have been reaching out to neighbors in the past few weeks to explain their intentions for the site.

The controversy over preservation of the historic Shotgun House has been an impediment to the development of the parcel, but Capitol Hill historic preservationists and early signals from the Historic Preservation Board seem to favor this development.

SGA Architects hope to take the design before HRPB in July, which would put it on the agenda of ANC6B earlier in the month.  That may be the only time it comes before the ANC if the plan to build by right stays in place, and no zoning changes are sought that would require a Planned Unit Development (PUD) procedure.  It could be a year before construction can start, leaving time for Frager’s to relocate their garden center.  No word yet on where that might be.

Asked for comment, ANC6B Commissioner Nick Burger, in whose single member district the project lies, said, “This has been a contentious site for many years.  I’m cautiously optimistic that this is a plan viable for the developer and one the neighbors would be willing to support.”  Burger said he had urged the developer to hold a community meeting to introduce the plan to the neighbors, and said the developer seemed amenable.

Butterfield House, the design of which pays homage to the Victorian era, has 28 condos and was finished in 2008.  The new project – so far unnamed – will be apartments, in contrast to the 30-40 condo units planned for the Frager’s site across the street.  No word on how much parking is planned for the new SAS development.

For a CHC post on the last time then-owner Larry Quillian tried to get rid of the Shotgun House, go here: http://bit.ly/28U4JPg  The result was that the Historic Preservation Review Board refused to permit its demolition.

*From Wikipedia:  “A “shotgun house” is a narrow rectangular domestic residence, usually no more than about 12 feet (3.5 m) wide, with rooms arranged one behind the other and doors at each end of the house. It was the most popular style of house in the Southern United States from the end of the American Civil War (1861–65) through the 1920s. Alternate names include “shotgun shack”, “shotgun hut”, “shotgun cottage”, and in the case of a multihome dwelling, “shotgun apartment”. A railroad apartment is somewhat similar, but instead of each room opening onto the next room, it has a side hallway from which rooms are entered (by analogy to compartments in passenger rail cars).

A longstanding theory is that the style can be traced from Africa to Haitian influences on house design in New Orleans,[1] but the houses can be found as far away as Chicago, Key West, Florida, Ybor City,[2] and Texas. Though initially as popular with the middle class as with the poor, the shotgun house became a symbol of poverty in the mid-20th century. Some of these houses are being bulldozed as part of urban renewal, while others are being saved for historic preservation. Others are saved and renovated in areas that undergo gentrification.”  Read more of this article here:  http://bit.ly/28MjWBr