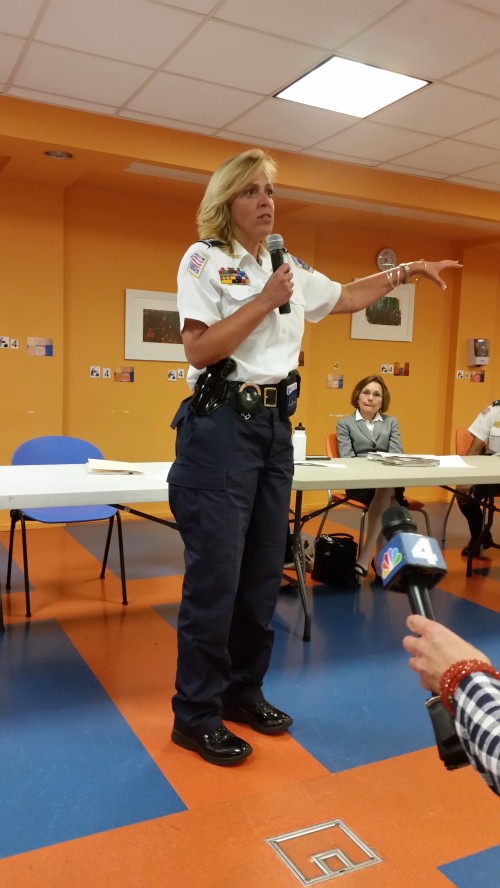 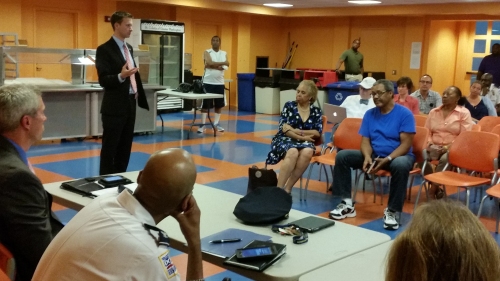 As does Council Member Charles Allen 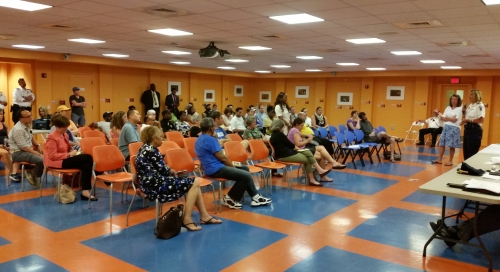 The overwhelming concern of those attending was what residents called an open air drug market at 17th and Independence, the scene of a semi-automatic gunfight early last Sunday morning between a group of young men hanging out at the intersection and another group of young males in a car which stopped at the scene.  A witness’s verbal description indicated that as many as 20 to 30 shots could have been exchanged.  One minor injury to a female bystander was reported along with considerable property damage.

Residents living nearby related their on-going experiences with those who they say are selling drugs on the corner but who live outside the District.  It is these visitors residents blame for the series of violent incidents that have occurred at the intersection and they want to know why police can’t prevent people from hanging out on the block.  One resident said the police are taking the problem too lightly.

Chief Lanier denied police are taking the issue lightly, and says that MPD faces a Constitutional rights hurdle prohibiting police from requiring those who loiter at the intersection to move elsewhere.  She said that some individuals had been arrested multiple times and that efforts of plain clothes officers against the alleged drug dealers would continue.  “I will make sure our team takes action,” Lanier said, “we know who the players are.”

Lanier believes that that we need to take a look at the criminal justice system.  She told residents that 50 of the most violent repeat offenders who are on the street today in DC have a total of 857 arrests among them.  Some 35 of the 50 are out serving part of their sentences in the community.

Krepp asked, “Why aren’t they in jail?’

Lanier responded, “You’re asking the wrong person.  My cops ask me that every day and I’ve got to get them out and on the streets.”

Residents near the intersection expressed their frustration.  One property owner who said she had lived in the neighborhood for forty years criticized the police for the way they “engage” the drug dealers, alleging that on the night of the recent shooting, police spent two hours talking to those hanging out at the corner “like they were friends” before being called away to another incident.  The shooting last weekend, she said, happened after police left.

The same longtime resident added, “They don’t respect your officers.  People are out there drinking alcohol.  I’m sorry [the police] are not doing their jobs.  I believe the officers are scared of them because they have bigger guns than the police.  None of them live on the block.  I lived there 40 years.  I grew up there and I know them.”

Another resident told police that the drug market used to be low-key and tolerable.  “Now, there are shots fired every six months.  The only thing preventing a homicide is peoples’ bad aim.  We need to focus on a long term strategy that will make clear that drugs can’t be sold with impunity on the corner.”

A third resident said that there were “so many shots [Saturday night] that I can’t believe it wasn’t a semi-automatic weapon.  It’s terrifying being awakened by gunshots – is scared the shit out of me.”

Krepp asked officials, “How do we get kids who don’t live there out?’  It turns out that there is not only no easy answer, there is no answer at all.

Chief Lanier:  We can’t tell people they can’t hang out on the block.”

Klein – “Unfortunately, there are no anti-loitering laws – they’re unconstitutional.  Police can make arrests, but they have to be there when a crime is committed.”

Krepp suggested a crime summit to bring together all city agencies to consider ways to address the problem and asked CM Allen what he thought.  Allen said that a community meeting would not solve the problem, that much of the problem was caused by the courts, and the courts had no accountability.  He suggested exploring ways to empower the community to be proactive in addressing crime issues.

Lanier says that the justice system is broken, and that before being proactive an analysis is needed to identify problems so they can be fixed.  She suggested that the first steps have been taken in the collection of data by the Mayor’s Criminal Justice Coordination Council.

Deputy US Attorney Doug Klein said that despite questions being raised about prosecution rates, the Department of Justice is processing the 350 cases it gets on a weekly basis “month after month,” and prosecuting those cases it thinks are winnable.

It may well be that the imminent opening of a 24 hour 7-11 convenience store at 15th and Independence – two blocks west – will solve the problem for the residents at 17th and Independence.  The outlet will offer food and drink 24/7, a natural hangout location, and a drive-through alley behind the store.  If not solved, the problem may be displaced, creating problems for a different set of neighbors.

To Lanier’s larger point, nothing illustrates more clearly that the criminal justice system is broken than the incarceration rate for the United States compared with other countries. According to the BBC half of the world’s prison population of about nine million is held in the US, China or Russia.

According to the Institute for Prison Policy Research, prison rates in the US are the world’s highest, at 724 people per 100,000.  In Russia the rate is 581.  Stats for the top ten incarcerating countries are as follows: