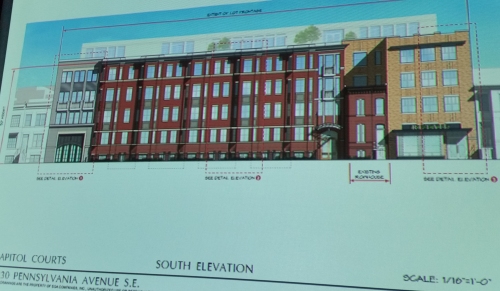 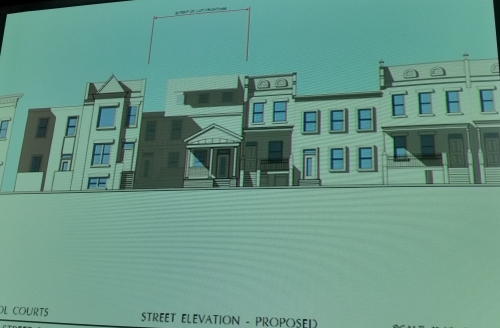 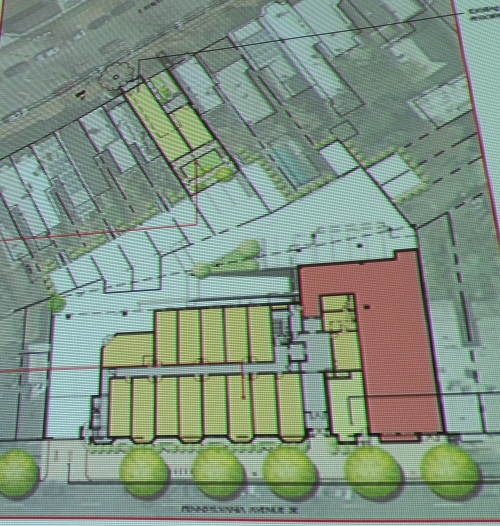 The site plan. The 5,000 retail space is indicated in red. The adjacent yellow area is the site of the bulk of the mixed use project. Access to the parking garage is on the left.  The Shotgun House site in in yellow near the top of the image.

Thursday night, Sassan Gharai of SGA Architects met with neighbors of the Shotgun House and the space currently occupied by Frager’s Garden Center in the 1200 block of Pennsylvania Avenue, SE, to reveal the preliminary concepts for development of those sites.

Gharai, developer of nearby Butterfield House, has a Historic Preservation Application before DC’s Historic Preservation Review Board (HPRB) for “Capitol Courts” – a 119 unit mixed use development for the north side of the 1200 block of Pennsylvania Avenue, SE, and the restoration and development of the Shotgun House at 1229 E Street, SE.  The projects are being presented as a package to the HPRB, though they are technically two separate projects.

Some 100 of the 119 units will be 400 square foot “junior bedrooms” – there will be a few one bedrooms and larger units.  The junior bedrooms will rent for $1200 a month with a minimum six month lease.  The units will be marketed to a “young crowd” and will be semi-furnished, with a bed, sofa, and coffee table.  “It’s a different way of living,” Gharai said, adding that “the rooms will essentially be glorified hotel rooms, with tiny, tiny, tiny, kitchens.”

The plan for Capitol Courts includes 5,000 square feet on the ground floor Southeast corner of the project, for a specialty foods and deli outlet featuring principally prepared food.  Gharai said he doesn’t want a restaurant because they’re “not clean and generate trash.”  He said he is talking with a new start up – Street Market & Café – as a possible tenant for the retail space.  See here:  http://streetsmarketcafe.com/

The four story apartment building would rise to 50 feet, plus a penthouse “party area” featuring entertainment for the tenants including television, a pool table, ping pong, a lounge, and a wading pool to facilitate cooling off for sunbathers.  The penthouse level will also feature bedrooms which can be rented to accommodate tenant’s guests.

There will be 21 underground and surface parking spaces, a bike room, and car sharing program.  Management will encourage renters not to own cars and Gharai anticipates banning renters from applying for Residential Parking Permits.  (Update: by making no RPP a condition of the lease)  Access to parking will also allow E Street neighbors to have new first time access to their back yards means of an easement Gharai will provide those residents.

SGA hopes to break ground in the spring of 2017.  John Weintraub, owner of Frager’s Hardware, said last night that the new Frager’s Hardware store across Pennsylvania Avenue will not be available until mid-2018 and he has not yet found a place to relocate the Garden Center.

The plan for the Shotgun House anticipates creation of two separate units which, unlike the apartments in Capitol Courts, will be sold.

SGA Architects plan to move the Shotgun House over to abut the adjacent house to the west.  The front 26 feet of the house will be preserved –  dismantled, reconstructed with “custom milled siding and a hand-crimped tin roof and custom windows.”  The restored Shotgun House will be one unit, and two-story extension in the rear will constitute the second unit.

Gharai said he hopes to start on the Shotgun House before the end of the year, if HPRB signs off on it and permits can be obtained.

ANC6B’s Planning and Zoning Committee will consider the Historic Preservation Applications of the two projects next Tuesday at its July meeting at 7:00pm, at St. Coletta’s.  The full ANC6B will then consider the HPAs at their monthly meeting on July 12, at 7:00pm at Hill Center.  These two meetings may be the only opportunities for the community to weigh in on the design elements of the projects.  Since the Capitol Courts is being built as a “matter of right,” no zoning changes will be required that will bring the project to back before the ANC regarding issues pertaining to height, massing, density, or light.

For previous CHC post on development of the Shotgun House and the Pennsylvania Avenue site, go here:  http://bit.ly/28NQ7Cg