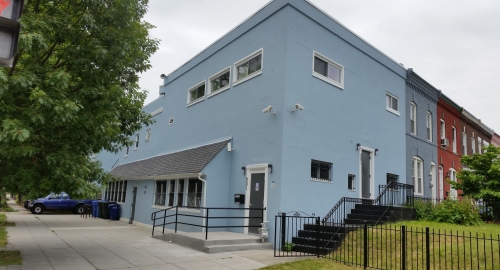 According to commissioner Krepp, Royster “…refused to provide information regarding Andromeda’s proposed services and directed Commissioner Jayaraman to FOIA the information.”  The commissioners told CHC that Royster said DBH doesn’t need to notify the ANC in advance of certifying a mental health clinic to operate in a community and is free to issue an approval without considering the impact on the neighborhood.

Last Friday morning, at his community office hours at Pretzel Bakery, CM Charles Allen told CHC regarding Andromeda, “There’s a need – we want to make sure it’s done the right way.”  Much of the hour and a half of Allen’s availability that morning was devoted to hearing more than a dozen neighbors express their strong concerns about the clinic.  Former ANC commissioner Brian Pate told Allen that he thought that it was “time to get some lawyers,” and cited his willingness and that of his neighbors to contribute to a legal fund to make that a reality.

Jayaraman said he will file a FOIA for the application Andromeda filed to get certified.  He wants to know where clients are coming from, the number of clients served, and what services will be provided by the clinic.

Jayaraman said he told Royster that the ANC has more input on a pop up in their neighborhood than on establishment of mental health services.  According to the commissioner, the agency determines the city’s need for more providers and certifies them to open until the agency determines there are enough.  In addition, he said, unless a provider receives money from DBH, there is no oversite of clinics.  Further, there is no absolute limit of clients a clinic may serve:  once a number of clients are certified using – say Medicaid funds from DBH – the clinic can treat other clients using other sources of funding from Court Services and Offender Supervision Agency (CSOSA) or Blue Cross/Blue Shield.

Jayaraman says he will ask ANC6B to send a letter to Royster opposing the establishment of Andromeda at 15th and Massachusetts, SE, including a request for a detailed response regarding how the agency gives the ANC opinions “great weight”.

Jayaraman has also filed an appeal before the Board of Zoning Adjustment, citing a 1997 case, claiming that DCRA incorrectly issued a Certificate of Occupancy for an Outpatient Substance Abuse Recovery facility as “General Office Use” which should, instead, fall under the category of a “Medical Facility”.  He says Andromeda is waiting for the appeal to be resolved so they can be certified to operate.    The appeal comes before the BZA on September 20.

If it proves to be the case that DBH is exempt from giving the opinion of the ANC “great weight”, it will be yet another example of the casual dismissal by yet another agency, which includes the Department of Transportation, Department of Consumer and Regulatory Affairs, Department of General Services, the Zoning Commission, the Bureau of Zoning Adjustment, the Alcohol Beverage and Control Administration and the Historic Preservation Review Board which routinely pay lip service to the ANCs, but then give them the backs of their collective hands.  In effect, they give the same treatment to the residents of the District.  Maybe the Mayor should step in and require that her agencies give the opinions of the ANCs the “great weight” to which they are entitled.  And maybe, when the residents and ANCs decide they have had enough, they’ll demand it.