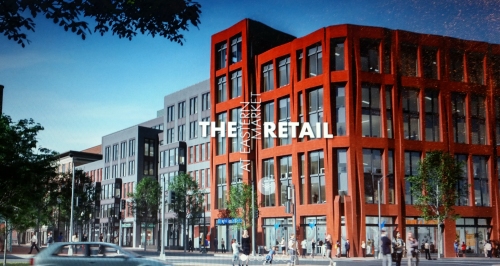 View of the 7th Street side of the Hine Project, looking Northeast. Image from At The Market website – see link below.

View of the Affordable Housing Component (North Building) of the Hine Project, with First Floor Retail, from the corner of 8th and the newly reopened C Street, looking Northwest. Image from At The Market website – see link below.

Image of the First Floor Retail Space Plan for the North and South Building. Image from At The Market website – see link below.

Project Has Changed Since Zoning

Stanton-EastBanc has launched the marketing of the retail and office space in the Hine project scheduled to open in the fall of 2017.  There are 14 retail spaces available – ten in the main South building ranging from 3800 s.f. to 1700 s.f., and four in the North Building, ranging from 1500 s.f. to 800 s.f.

No word yet on marketing of the residential space, but indications are the units will be apartments rather than condos as originally planned.

The office space is being branded as “700 Penn” – http://700penn.com/; the retail space is piggybacking on the Eastern Market brand with “At Eastern Market” –  http://ateasternmarket.com/

The project has changed modestly since it went before the Zoning Commission for final approval.

158 residential units have been increase to 162

260 parking spaces have been increased to 320

The At Eastern Market website claims some interesting facts regarding the neighborhood – though not specifically stated – perhaps defined by the census tract – see below.

The two marketing websites list an Eastbanc telephone number as the contact for questions, though the At Eastern Market website says Stanton-Eastbanc is handling development and retail.  A third entity – Jones Lang Lasalle (JLL) is listed as a team member on the 700 Penn website office leasing website and appears to be a property management company.