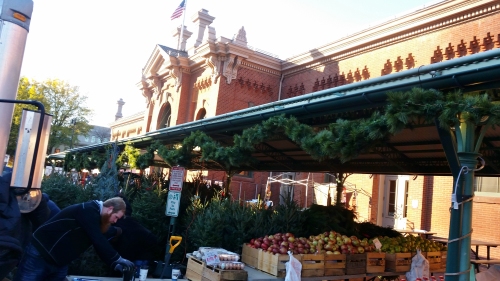 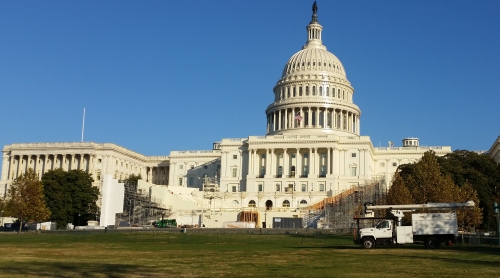 The Architect of the Capitol continues construction of the Inaugural Platform on the West Front of the U.S. Capitol. The slender structure seen against the shadow center left, is the center camera stand for the pool television cameras, the pool still photographers, and the official video and still photographers. The steel scaffolding to the left will support covered broadcast positions for radio and social media news personnel. The steel scaffolding to the right will support tiers of television cameras above, and more live radio broadcast and social media positions below. The wooden framing to the lower right of the center camera stand marks the location where the President will take to oath of office. November 27l 2016, circa 3:00pm. (Click to enlarge)

Sunday, November 27 – Shooting at 600 block of L Street SE near the Capper Community Center (See recent post here:  http://bit.ly/2fL8Fpy)  Update:  at 10:01pm Sunday night, police have termed this shooting a homicide:  “At approximately 12:44 pm, members of the First District heard the Sounds of Gunshots in the area of the listed location. Upon arrival, members located an adult male and adult female suffering from multiple gunshot wounds. The female victim was transported to a local hospital for treatment of non-life threatening injuries. The male victim was transported to a local hospital where all lifesaving efforts failed and he was pronounced dead.”

According to Krepp, the original purpose of the meeting was to address the two shootings that occurred on the 1500 block of A Street SE last Saturday and the increase in violent crime, trash, loitering, and other problems in the area.  The meeting has now been expanded to address the tragic murder at Potomac Gardens.

MPD is offering a reward of up to $25k to anyone that provides information which leads to the arrest and conviction of the person or persons responsible for any homicide committed in the District of Columbia. Anyone with information about this case is asked to call the police at 202-727-9099.  Or text anonymously to 50411,

Krepp has invited representatives from the DC Housing Authority, the Community Action Group, SE Market, and 7-Eleven to participate in the meeting.

ANC6D Executive Committee meets at 7:00pm in Hill Center to set the agenda for the meeting of the full ANC on Tuesday, December 13.