100 Plus showed up for last night’s community crime meeting at St. Coletta’s of Greater Washington 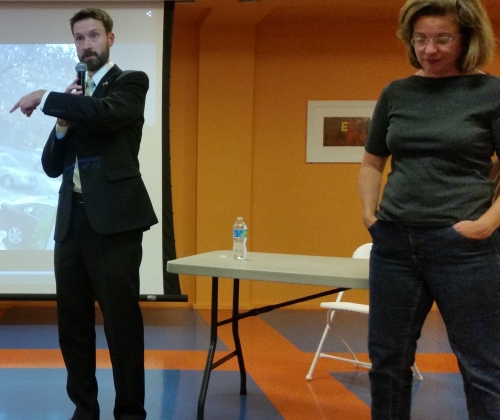 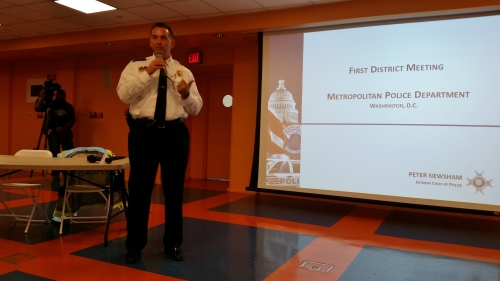 City officials and MPD met with a crowd of more than 100 Capitol Hill residents last night at St. Coletta’s  to discuss recent shootings on Capitol Hill, one of which resulted in the incidental death of 16 year old girl.

Saeve Evans – wanted as person of interest in murder of 16 year old Breyona McMillian – has turned himself in to MPD tonight.

With respect to the latter, which occurred the day after Thanksgiving near 12th and I Streets, SE, Interim Police Chief Peter Newsham said, “We’re very confident we can bring some of the people” responsible for the death of Breyona McMillian into custody.  Of the two shootings on Saturday, November 19, near 15th and A Streets, SE, he was less confident, saying police “did not have a lot of leads” on those.

Three ANC6B Commissioners – Krepp, Chao, and Jayaraman – were on hand to ask what else the residents and the ANC could do to discourage crime in the community, to express their constituents’ frustration over having yet another meeting on crime, and to assert that the residents were doing their part by calling 911 and installing cameras.  Krepp had called last night’s meeting at St. Coletta’s after the shootings at 15th and A Streets.

Councilmember Charles Allen, saying that the killing of Breyona McMillian “shook the Potomac Gardens community,” credited Mayor Bowser’s press conference Monday night with generating tips on the killing.  Allen said he’d had conversations with District 1 MPD officials to determine how the deployment of officers would change and what MPD’s strategy is for disrupting and eliminating the activity leading to the shootings.

In response, Newsham tried to reassure residents.  He gave a PowerPoint presentation with statistics indicating a substantial drop in violent crime in the First District this year through November compared to the same period during 2015.  He said that the number one thing the community can do is to continue to work with police: for its part, the MPD has increased the number of patrols and special units in Capitol Hill with a focus of getting illegal guns off the streets.  He cited four recent gun arrests and four gun recoveries.

During the question and answer period, residents questioned why police aren’t more aggressive in intervening with a group of men and juveniles who gather on corners in the area of 15th and A Streets, SE.  One resident said he had complained for “months and months and months” to police about public use of cannabis and the sale of drugs by the group.

Newsham said that police could only intervene if individuals were observed doing something illegal and that police response too often turns into a “cat and mouse game that does not do any good,” where the illegal activity stops before police can get close enough to observe it.  He went on to say in seeming contradiction, “If you’re willing to participate – if you say ‘I saw that person in those clothes smoking marijuana’ we could make an arrest.”  But, he noted, police can arrest someone for smoking marijuana in public and the odds are that person will be out the next day.

For some residents, more cat and mouse game would be just fine.  “I want these people to be uncomfortable,” said one young mother who has encountered weed smokers near 15th and A with her daughter.  Allen seemed sympathetic to this approach, saying that one of the strategic things MPD could do is to specifically target these blocks and figure out what we can do in terms of charges – even minor ones – to get prosecutors and courts to issue stay away orders.  Allen noted that DC has no anti-loitering laws which were deemed unconstitutional by the Supreme Court and that “MPD has to use the tools they have more effectively.”  Allen also cited the problem with prosecutors – DC has no District Attorney – most crimes are prosecuted by the U.S. Attorney’s office, over which the City Council has no oversight.

Several concrete suggestions on moving forward came out of the meeting.  These included Allen’s pursuit of legislation providing penalties for tampering with GPS bracelets, his support for funding for Commissioner Daniel Chao’s effort to make the pocket parks near Potomac Garden positive spaces, and budgetary support for MPD to help retain and recruit police officers in the face of the losses incurred through a “retirement bubble.”  Another idea was to install speed bumps on I Street, SE, which Chao called a long-term hotspot that he had complained to police about numerous times.  Deputy Chief Reese of the DC Housing Authority said that additional cameras would be installed near 12th and I Streets, SE, in the next two or three weeks.

Other measures which residents can take include taking advantage of DC’s Private Security Camera Incentive Program http://bit.ly/2gEXX0S and continuing to participate in meetings like the one last night.  Police want to hear from residents what they can do to be helpful.  Several residents and officials stressed the importance of community involvement to address the systemic problems, helping to launch youths into productive activities through programs such as the Little Lights organization at Potomac Gardens and Eastern High School’s mentoring program.  http://www.littlelights.org/

Newsham attributed much of the violent crime to illegal guns and repeat offenders.  He asked residents to consider the question of penalties being handed out by the courts, saying that –“Speaking as Pete  Newsham – in my opinion, nothing is worse that arresting someone for a violent crime and then having them commit a violent crime after release.”  Krepp, at the suggestion of one resident, agreed to write a letter which residents could use as a model to express these concerns to the U.S. Attorney’s Office.

Editor’s Note.  ANC6B Commissioner Daniel Chao has asked CHC to help circulate the Go Fund Me link below for costs associated with Breyona McMillian’s  burial services.  Chao says her father passed a year ago from cancer and her mom needs all the help she can get to ensure a proper burial.