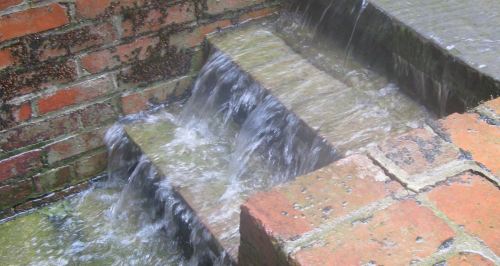 Here’s what happens to Hank’s neighbor when it rains.

CHC readers may remember a post from last August touting the martialing of city forces to address a flooding problem suffered by a Capitol Hill resident at the hands of Hank’s Oyster Bar and two adjacent businesses.  (See here: http://bit.ly/2aZZ8cD)  The article expressed hope that after many years of effort, the resident’s concerns were going to be addressed.  Five months later, not only has the resident found no relief, the resident’s last ally – ANC6B – is facing a last ditch stand before the city’s Alcohol Beverage Regulatory Administration (ABRA)  to try to get a city agency to address the problem.

Ronald J. Tomasso, resident of D Street, SE, whose property backs up to Hank’s Oyster Bar on Pennsylvania Avenue, SE, suffers flooding every hard rain, from Hank’s drainage downspout which is disconnected from the combined storm/waste water sewer behind the restaurant.  Background on how the drain became disconnected was covered in the previous blog post, but date back some ten years to a time when – according to Tomasso – an addition was constructed illegally behind the building now housing Hank’s.

Tomasso has appealed to Hank’s for four years – since 2012 – to fix the problem though his efforts to find relief date back much further.  Hank’s has made some gestures which involved assessing the problem but has made no move to remedy it.

ANC6B’s ABC Committee, under Chairman Chander Jayaraman, has been active in using applications for new liquor licenses and liquor license renewals as leverage to rein in restaurants causing quality of life issues for nearby neighbors.  Restrictions on operations are routinely written into a Settlement Agreement under which restaurants agree to certain operating procedures as a condition of receiving a license.  Commissioner Diane Hoskins has led the effort to protest the renewal of Hank’s liquor license to bring pressure on the restaurant to provide relief for Tomasso.

Under threat of an ANC6B protest of their liquor license renewal over the issue, Hank’s appeared to be amenable to mediation on the matter.  Those negotiations came to nothing and fell apart a few weeks ago.  ANC6B moved forward with its license protest and Hoskins filed a list of exhibits she intended to use in the case against Hank’s.  Hank’s attorney, Andrew Kline, (See here:   http://bit.ly/1WPEDPy) filed a motion with ABRA to exclude seven of the 11 exhibits Hoskins filed – including testimony from Tomasso – citing issues of timeliness and relevance.  Last week, ABRA heard arguments for and against the motion to exclude the exhibits.

Judging from documents filed with ABRA, Kline’s main point is that flooding has nothing to do with the serving or consumption of alcohol, and the issue is outside the preview of the board.

Hank’s admits there is a problem.  Kline’s filings with ABRA state:  “Unfortunately, there is an issue with storm water drainage on and around the Licensee’s premises and Tomasso’s residence which effects (sic) the entire neighborhood.” And, “The Licensee has [taken steps to remedy] despite a lack of clarity as to whether it is the Licensee’s or its landlord’s responsibility.”

According to a memo submitted to her fellow commissioners, Hoskins responded to Kline, saying to ABRA that the issue of timeliness is unfounded and that the unique characteristics of the case, including the length of time involved and the “absolute unwillingness” of the applicant to deliver a remedy warrants consideration under DC Code which explicitly states ABRA’s authority to consider violations of the laws of the District when considering license renewal.

She cited a DCRA’s inspector’s report finding violation of the law in having a drain pipe disconnected from the storm sewer.  The penalty was a $100 fine for the building owner.  Hoskins told CHC, “It was a challenge to get DCRA to conduct the inspection and took numerous follow-ups for the Agency to finally issue the citation.”

Kline’s assertion regarding steps taken by Hanks to remedy the problem and his claim of lack of clarity regarding responsibility seems both undeservedly self-serving as well as disingenuous given the length of time and lack of progress.  What does seem clear is that the city has failed a member of its community as it often does when commercial interests conflict with the interests of residents.

ABRA will rule on Kline’s motion to exclude next week, and ABRA, as CHC has reported before, tends to give the benefit of the doubt to applicants and short shrift to the “great weight” accorded to ANC opinion by DC law.  The ABRA hearing on the ANC’s protest of the license will follow sometime in January.

ABRA could decide to admit the evidence offered by the ANC act within what appears to be its authority vis-à-vis consideration of compliance with DC law as a criterion for renewing a license and accomplish what DCRA is unable or unwilling to do:  provide a relief for Tomasso.

Community members must wonder why they should patronize restaurants which demonstrate their indifference to being good neighbors.