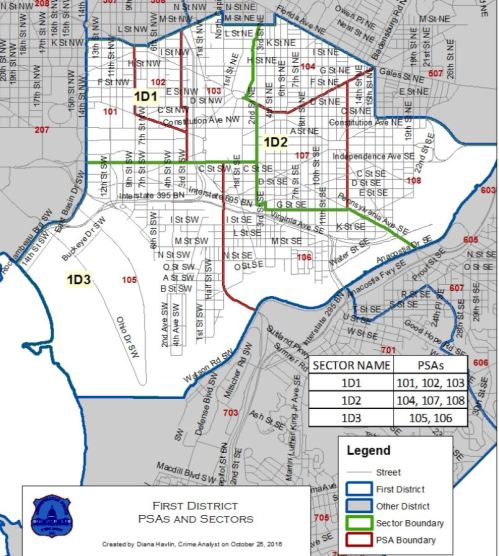 Thursday night, at the PSA 107 meeting, MPD Captain John Knutson explained the operation of the new Sector Concept instituted January 3 by MPD.  It will, he said, bring additional management accountability to districts, allow for faster dispatch, lower response times, and improve service to the community.  The sector concept does not eliminate PSAs – those boundaries within the First District remain the same.

Under the Sector model, each patrol district is divided into three sectors with a Sector being an informal grouping of Police Service Areas (PSAs).  Each sector will be led by a captain, who will report directly to their respective district commanders. Each Sector will also have 3 Lieutenants on 3 shifts for round the clock coverage.

Knutsen pledged 24 hour availability 7 days a week, and attendance at monthly community PSA meetings in a renewed effort to improve community policing.  Lieutenants will share responsibility for overseeing the PSAs and personnel in their sector on any given shift.

According to Knutsen, the main benefit of the Sector Concept is that it will allow MPD to pool resources of the three PSAs and allow police to shift resources where needed to respond to crime patterns.

While Knutsen and his Lieutenants are available 24 hours a day by phone or email, if residents witness a crime in progress, they should call 911.

Knutsen stressed: “For this sector, I am the decision maker and I’ll be at meetings,” referring to PSA meetings.  He said that MPD will take a look at meetings to see how they can be structured to better serve the community – or example, next month’s meeting will be held on the first Thursday in Northeast Library.  Referring to his fellow captains in charge of Sectors, Knutsen said, “We all run Sectors as little police stations.  We’re all competing against each other.”

Officials say they generally answer emails 24/7 and the cell phone when at work.

For more on the Sector Concept, go here:  http://bit.ly/2l5tsDV