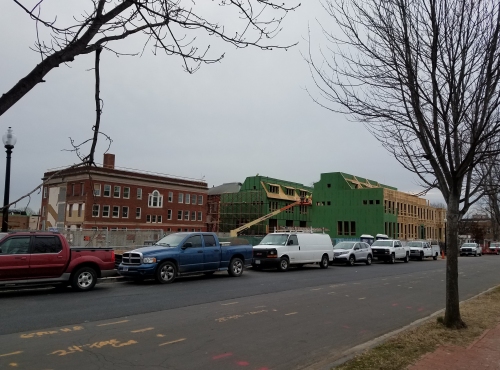 Progress continues on Buchanan Park – the redevelopment of the Buchanan School site adjacent to and on the west side of the southeast Safeway.

417 4th Street, SE, (HPRB denied ANC6B approved application for special exception to permit a third floor in December.)  This appears to be a reconsideration of the Historic Preservation Application – perhaps of a new concept – for construction of a three-story rear addition to an existing three-unit apartment house in the RF-3 Zone at premises.

Application for Minor Modification of Zoning Adjustment order for 1401 A Street, SE.

Establishment of a Committee Working Group on Alley Naming.

Update on Status of DDOT Study.

The DC City Council Committee on the Judiciary and Public Safety will hold a Public Oversight Roundtable on the following Matter:  Sentencing in the District of Columbia: Agency Roles and Responsibilities, at 9:30am in the Wilson Building, 1350 Pennsylvania Avenue, NW, Room 500.

The Committee invites the public to testify or to submit written testimony. Anyone wishing to testify at the roundtable should contact the Committee on the Judiciary and Public Safety via email at judiciary@dccouncil.us or at (202) 727-8275, and provide their name,  telephone number, organizational affiliation, and title (if any), by close of business, Monday, February 6, 2017.

Update on Hank’s Oyster Bar Protest and decision on the Motion in Limine.