Elevation of the Beckert’s Park looking Southwest, from 14th and D Streets, S.E. 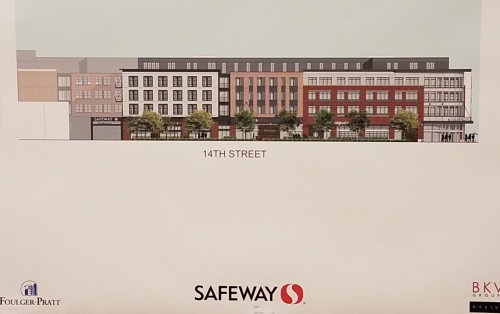 Elevation of the view from 14th Street, S.E. Entrance to retail parking, Starbucks, and a 5000 square foot retail outlet on the left.

Elevation of D Street side. 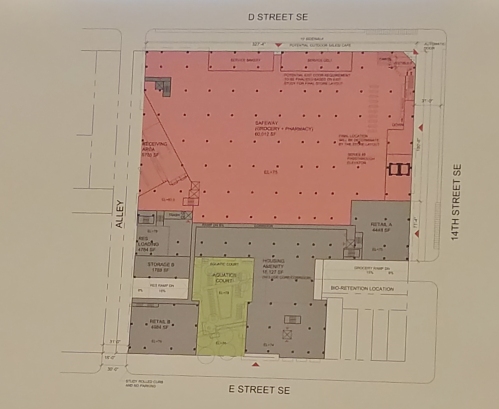 First floor plan, showing Safeway space in red. Note retail space in grey on lower left corner facing E Street, and a second retail space on 14th Street the the right, just below Safeway’s space. The green area indicates the location of the 6,000 square foot aquatic court. The entrance to the residences is just to the right of the aquatic court and the residential space comprises the rest of the ground level. Click to enlarge. 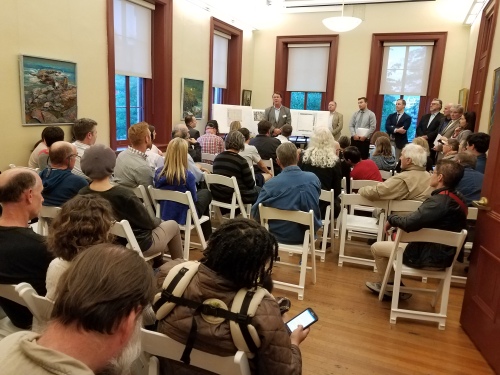 Some 50 residents turned out to here the proposal for the redevelopment project.

Monday night, Safeway senior real estate manager Tim McNamera and developer Bryant Foulger of Foulger-Pratt Group, the developer Safeway has selected to redevelop the Capitol Hill southeast Safeway site, sponsored a community meeting in Hill Center.  The purpose, according to ANC6B Planning and Zoning Committee Chair Nick Burger was to provide an opportunity for residents to learn about the project and provide feedback.  ANC6B will provide input regarding the project in June, both at the Planning and Zoning Committee meeting and at the June meeting of the full ANC.

Foulger unveiled the concept design for the new project on 14th Street between D and E Streets, S.E.  Key features of the project are as follows.

Folger Pratt hopes to break ground mid to late summer of next year, and plans for a 24 month construction period.  The project will be built as a matter of right under current zoning, meaning there will be no Zoning Commission Review.  Since it lies outside of the Historic District, there will be no Historic Preservation review.

Plans for the project will be posted shortly on the DC Office of Planning’s website where residents will have an opportunity to make comments addressed to the Office of Planning. https://planning.dc.gov/node/640482