MGM plans a lobby shop for this building at 501 C Street NE, facing Stanton Park.  Across the street to the right is Peabody School. 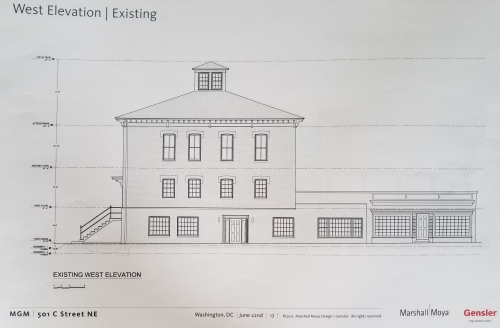 Here’s the current West Elevation of the structure.  The contentious issues are visible from the proposed changes, viewed below. 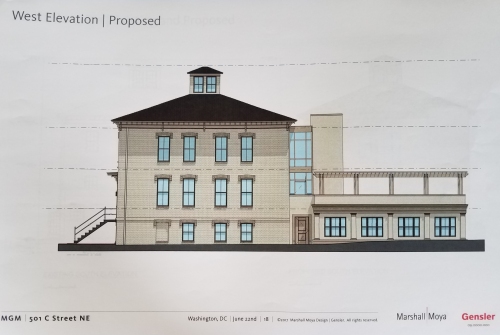 This shows the size of the proposed party deck.

ANC6C and CHRS say the side yard – which is actually public space – will be used for parking.

This is the view of the proposed modifications from 5th Street, looking northeast.

The erosion of Capitol Hill residential neighborhoods takes place in large ways – like the use of townhouses on New Jersey Avenue by lobbyists and non-profits for offices, and small – like the incompatible additions to and uses of commercial buildings that have a negative effect on residents.

A case in point concerns the deep-pocketed MGM Corporation which is in the business of films and gambling (National Harbor casinos), which plans to open up a lobby shop at 501 C Street, NE, on the south side of Stanton Park.  The 500 block is zoned C-2a for office use and all the buildings on C Street are used for that purpose.

MGM plans to restore and renovate the former residence in ways that should delight neighbors as well as those concerned with historic preservation.  But what MGM gives with one hand, it takes away with the other.

The design includes elements that raise the hackles of nearby residents as well as the Capitol Hill Restoration Society and a majority of ANC6C’s Planning and Zoning Committee.   These elements include an exterior elevator tower with glass sided bridges between the tower and the building’s upper floors, an expansive roof top party deck with a pergola behind the building, and parking on public space.  Most of the other businesses on the block have private parking space, and none has a roof deck.

The Capitol Hill Restoration Society (CHRS) met with Adams and Marshall on June 5.  CHRS found that the elevator addition, the roof top deck, and the pergola rendered the project incompatible with the Capitol Hill Historic District.  The Society also noted concerns regarding “the potential noise and function of the roof deck as well as the continued use of the side yard for parking,” (neither directly related to historic preservation though some preservationists are making a case that use of public space is a historic preservation factor) as well as lack of letters of support from nearby residents.  It would surprise if such letters are forthcoming, given the impact on the neighborhood of parking for MGM staff and those attending events at the building.

On Thursday night, the ANC6C’s Planning and Zoning Committee voted 4 – 3 to oppose a motion to support the Historic Preservation Application, without revisions to address the issues of the elevator tower, the party deck, and side yard parking in public space.  The full ANC6C will consider the HPA at its meeting at 7:00pm, Wednesday, June 14, at the Heritage Foundation, 214 Massachusetts Avenue, NE.

MGM representatives had until the close of business today, June 12, to submit modifications of the plan.  The Historic Preservation Review Board Hearing on the matter is scheduled for Thursday, June 22, 2017.

The ANC is an advisory body, whose opinion is, by city regulation, given “great weight” by city agencies.  Many in the community who have been involved in trying to preserve the residential character of the Capitol Hill community feel that the MGM proposal crosses a line.   Much will depend on residents’ attendance at public meetings where this is being considered – the ANC6C meeting on Wednesday, and the Historic Preservation Review Board hearing on June 22.