In Face of Opposition, Hispanic Caucus PAC Pulls Application for Office Near the Capitol Building 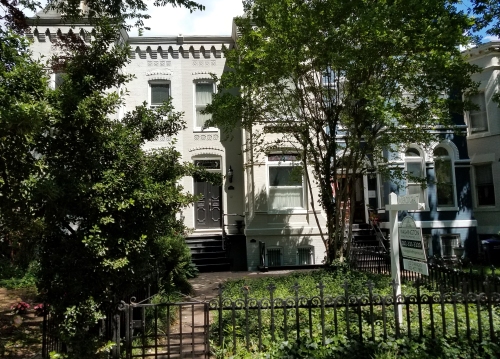 The Congressional Hispanic Caucus will not be housing its PAC office and event space out of 428 New Jersey Avenue, SE.  The failure to get the zoning adjustment in order to operate in the residential neighborhood will apparently nix the $2 million sale.

In Face of Opposition, Hispanic Caucus Pulls Application for PAC Office Near the Capitol Building

Today, the attorney for the Congressional Hispanic Caucus (CHC) formally withdrew the group’s application for a zoning adjustment to permit CHC to use a residence in the 400 block of New Jersey Avenue, SE, as their PAC headquarters and event space.  The letter to the BZA withdrawing the application came from attorney Meridith Moldenhauer of Cozen O’Connor, and said in part, “On June 7, 2017, the [BZA] granted a continuance of the hearing to allow the Applicant additional time to further supplement the record.  As a result of further deliberation, the Applicant withdraws the Application.”  The sale of the townhouse to the CHC was apparently contingent on the zoning relief.

At issue was the application to waive DC regulations limiting nonprofit organizations operating in residential neighborhoods to buildings of 10,000 square feet or more.

No reason was given for the action, but neighbors believe that opposition from more than a dozen residential neighbors (who had hired their own attorney), ANC6B, the Capitol Hill Restorations Society, the Office of Planning, and the Architect of the Capitol, left CHC with slim chance of prevailing before the BZA.

One nearby neighbor told Capitol Hill Corner, “We’d certainly like all of the people with property to sell in this neighborhood and the realtors interested in selling those properties to know we are organized and effective.”  DC’s Office of Planning recommended denial of the variance, finding “it could result in a substantial detriment to the public good.”  The Architect of the Capitol found that the zoning change could “adversely harm the area adjacent to the jurisdiction of the US Capitol…and could result in a significant detriment to the character of the residential neighborhood.”

The block is home to several organizations currently operating businesses in a residential zone.  But the city is starting to take a hard look at the erosion of residential neighborhoods near the Capitol.

ANC Commissioner Jennifer Samolyk, in whose single member district the property resides credited the activism of neighbors whose efforts had contributed to shutting three down non-residential “party” houses on nearby D Street, SE.  In addition, as a result of a complaint which Samolyk filed with DCRA, the city has started an official investigation of another business that appears to be operating out of a New Jersey Avenue residence without a certificate of occupancy and in violation of the zoning regulations.

The decision is likely to affect the desirability of other properties on the block in the eyes of non-profit or non-residential users.  Currently there are two adjacent townhouses up for sale on the block, reportedly by a single owner.  433 New Jersey is listed at $1.4 million and its neighbor is listed at $1.77 million.  The real estate listing notes:  “Opportunity Abounds!  Your chance of a lifetime to own not just one, but two adjacent houses on New Jersey Avenue.  You could scarcely get closer to the US Capitol and House Office Buildings, the DNC and the RNC.”  The properties have been on the market since last December.

Asked for reaction, Samolyk told CHC, “If the variance was granted it would have set a precedent having far reaching affects across ANC 6B. Allowing special interest groups, like the Bold PAC, to take over residential homes for event spaces would ruin the unique residential character of Capitol Hill. The residents on New Jersey Avenue took a stand not only for their own street- but for all of Capital Hill and for that I am very grateful.”

CHC reached out to Moldenhauer but has not yet received a response.  CHC will update this post upon receipt.

12 responses to “In Face of Opposition, Hispanic Caucus PAC Pulls Application for Office Near the Capitol Building”