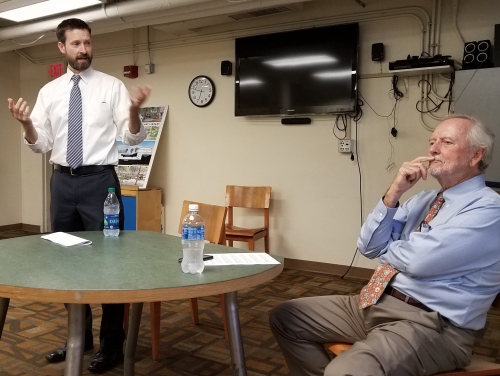 Some of the residents and stakeholders who turned out for last night’s meeting in Southeast Library.

The redesign of the Plaza is a priority for Allen, which has resulted in a budget allocation for the project of $1 million in FY 18, $1 million in FY 19, and $2.5 million in FY 20. He said that $4.5 million will not do everything, but it will fund improvements, engage the city, and provide momentum.  Allen said, “There is a lot of consensus that Plaza can be so much more – a place where the community can gather…a community hub.”

The first $1 million for the Plaza will become available October 1, 2017, and one of the first projects is likely to be a playground replacing the “guerilla playground” on 9th Street, SE, between D Street and PA Ave.  That spontaneous community-sponsored playground of plastic toys was dismantled and carted off by the Department of General Services last year because of liability issues.  Allen said that $1 million gets you “a pretty phenomenal playground” and noted that the $125,000 community amenity required from the Hine developers as compensation to the community for the project’s impact is already in escrow, waiting to be used for the playground along with city funding.  (Attendees were quick to point out that the city allowed the developer to deduct the $125,000 from the cost of the site, meaning that it actually comes out of taxpayer’s pockets.)

Allen said that the future FY funding will take the rest of the redesign concept to the planning level, likely following the guidelines of a plan formulated by architect Amy Weinstein, though realizing that plan will require additional money.  The 2014 Weinstein plan, which was funded by a Congressional earmark to Barracks Row Mainstreet, placed a price tag on the overall project of $45,213,645 million – $13,517,595 for the parks and plaza, $22,765,637 for the library, $8,930,413 for DC Agency management fees plus reorganization of traffic, and a $1.54 million maintenance endowment to provide the estimated $75,000 annual maintenance costs.  See here CHC report: http://bit.ly/2mOFrHG.

The Weinstein plan includes a redesign of the Southeast Library with a major expansion under 7th Street and a new entrance on the Plaza, but Allen cautioned that there is no current plan for redesign of the Library, and noted that DC Library officials believe that the Weinstein plan will cost more than the $22.7 million price tag she placed on the project.  The officials also raised concerns regarding multiple entries to the library which will require twice the current staff.

Renovation and expansion of Southeast Library – one of the city’s smallest and busiest – has been budgeted to the tune of $10.9 million in FY 19, and $12.5 million in FY 20.  None of those funds can be used for the Plaza, but timing is such that they will be available for use at the same time the Plaza plans will unfold.  Allen said that he views the Plaza as an extension of the library, and the challenge will be how to incorporate use in the Library renovation.

DC Library is anticipating a “soup to nuts” modernization, gutting the current historic structure, and rebuilding it in a way more in accordance with the way libraries currently function.  Allen said that a year from now, he expects the community engagement to begin, in advance of the first round of funding becoming available in October of 2018.