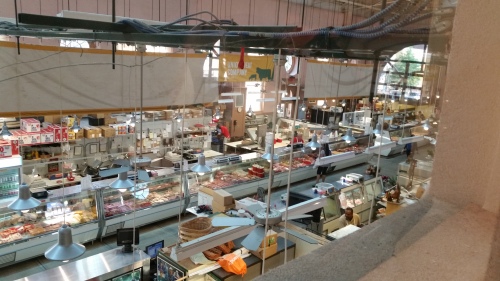 Tuesday, CM Charles Allen told the Director of DGS, Ms. Greer Gillis that Eastern Market is a public good and that outweighed the city’s goal of making the Market self-sustaining. The statement was directly related to the city’s controversial appraisal of merchant stall space inside Eastern Market.  The appraisal recommended substantial increases in the rent for South Hall food merchants in apparent violation of a cap on rents provided in statute.*

Allen later told Capitol Hill Corner that “Eastern Market is absolutely a public good.  It is a public good to have a healthy and thriving market.  I’m not looking for fees that would make the Market entirely self-sustaining.  The question is can DGS increase the rent beyond what the law allows.  Director Gillis says yes – my recommendation is that DGS provide a written legal opinion” justifying that assertion.

As previously reported (http://bit.ly/2fTLhsv), EMCAC has rejected the DGS appraisal and the substantially increased rents for the South Hall as flawed in conception and conclusion.  But EMCAC is an advisory body, and DGS is not bound by their decisions.

As part of their right to respond to the city’s appraisal, the South Hall merchants are contracting for their own appraisal and a new scope of work based on what they think is important.  Any substantial differences between the two appraisals will be referred to a third appraiser for a final recommendation.  The city wants the second appraisal in hand by January 22, a deadline that the South Hall merchants and EMCAC says is too short, given the demands of the upcoming holiday season.

Scheeder moved that EMCAC send a letter to Mayor Bowser, CM Allen, and DGS urging that the timeline be suspended and any requirement for a second appraisal by the South Hall merchants be stayed until DGS renders a legal opinion on how the city can set a new rent level in contradiction to existing statute.  EMCAC asked for the opinion by the next regular EMCAC meeting on November 29.  The motion was agreed to unanimously.

Scheeder said that in addition to the appraisal, the participants in Allen’s meeting discussed the use of the 300 block of 7th Street (currently used by the weekend flea markets) and an overview of Eastern Market and it’s Special Use Area.**

Market Manager Barry Margeson reported to EMCAC last night that both weekend flea market managers had signed a seven month vending license extension at a 52% increase in monthly rent for the 300 block of 7th Street, as recommended by the city’s appraisal of the block.

Sheeder said that EMCAC’s position is that 300 block needs sustained activity. She complained that the Committee did not have input on the statement of work for the appraisal of flea market vendor spaces on the 300 block, nor was it given time for review, both of which are required by the statute governing Eastern Market.***

Scheeder moved that EMCAC go on record as stating the Special Use Area** should be appraised as a whole and not piecemeal, that EMCAC’s advisory role had been ignored, and that EMCAC rejects “everything in the process” concerning the appraisal of the vending spaces on the 300 block of 7th Street and the appraisal of the South Hall.  The motion was agreed to unanimously.

Vice Chair Chuck Burger then moved that the Committee go on record as stating that the rent for the flea market vending spaces should not be increased because EMCAC had rejected the appraisal.  That motion carried 8 – 1.  (The vote will have no effect on the flea market managers’ rents since both have signed license extensions with the city at the higher rent.)

CHC followed up with Allen and asked him about the need for an overall business plan for the Market.  Allen said that he believes we need a strategic plan involving all the stakeholders. While there is currently no money in the budget for such a study, he said, “I’m prepared to go to bat to make sure we get the resources we need.”

*Annual rent increases for any operators shall be limited to 102% of the Consumer Price Index (“CPI”), or to an additional amount to reflect the cost of additional services provided, except that in no instance shall the annual increase exceed 110% of the CPI.

**The Special Use Area is generally speaking the portions of 7th Street and C Street being used by the flea markets as well as the sidewalks around the Market and the plazas on the north end of the Market and in front of the Rumsey Aquatic Center.

***Here’s a link to the statute governing Eastern Market:  http://bit.ly/2y7cmAu