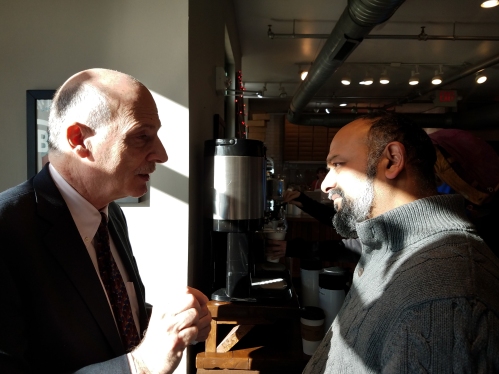 City Council Chair Phil Mendelson heard concerns of Capitol Hill residents on Thursday morning at Pretzel Bakery in Hill East, a few blocks from his own home near Watkins School.

ANC6B Chair Chander Jayaraman was there to follow-up on his testimony from the day before in support of strengthening CM Charles Allen’s Rat Bill, the subject of a city council joint committee hearing.*

Mendelson told Jayaraman his takeaway from Wednesday’s hearing was that if we want to decrease the rat problem we have to deal with it systemically.  He said that approaching restaurants one at a time is not an effective approach and that the appropriate city agencies need to sit down with all the restauranteurs in a block or a couple of blocks to create a plan.

Jayaraman – who along with ANC6B have pushed the city for stronger rodent controls** – agreed, noting that the ANC could only deal one on one with restaurants because their leverage was limited to tying trash and rodent management issues to individual liquor licenses issuance and renewals.

Mendelson said the hearing on Wednesday left him with the impression that city agencies’ roving control approach will not solve the problem.  He was dismissive of agency representatives who tried to make a case that they have made progress on rodent control and asserted there are fewer rats in the city today than in the recent past.  Mendelson noted that when he suggested a systemic plan for dealing with the rat problem on a block by block basis, he “got a blank stare from agency officials”.

Mendelson’s next move will be to sit down with CM Gray and CM Allen and talk about how to strengthen the bill.  “When it comes to me, my committee will do a detailed report.  He added that changing laws want help without requiring changes in the vision of the Department of Health and other city agencies.

Asked for his reaction to the hearing Wednesday, Jayaraman said he was pleased that so many ANC6B residents testified.  He added, “Residents of ANC 6B spoke loud and clear that simply proposing that restaurants enclose their trash will not solve the problem. They spoke clearly about the need for interior storage of trash and grease and additional resources for DOH to hire more people than the current 4 inspectors and 8 exterminators for the entire city.”  Jayaraman said he intended to follow up with CM Gray about motivating trash companies to develop better trash receptacles or at least enlist them in the effort to become part of the solution.

The discussion ended with Mendelson accepting Jayaraman’s invitation to come to an ANC6B meeting.

** Jayaraman and ANC6B – supported by a strong coalition of active community members – have been leaders in using liquor licenses to require restaurants to follow best operating procedures, including rodent control.  CM Allen offered to “take a crack” at creating rodent control legislation at an appearance before ANC6B after community members turned out in force to vehemently insist that the city make greater efforts to control rats.  See here:  http://bit.ly/2mQRCFS